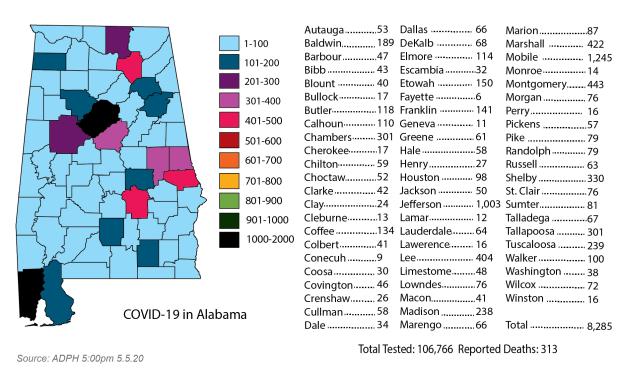 As  4 p.m.., the Alabama Department of Public Health reported 79 confirmed COVID-19 cases in Pike County, with more than 730 tests conducted and no deaths.

The ADPH reported a total of 8,285 confirmed cases in the state with 313 reported deaths and more than 106,700 tests conducted.

Friday also marked the first full day of the “Safer at Home” health order that allows the reopening of Alabama’s beaches and retail establishments, at 50% capacity, and the resumption of elective and non-emergency medical procedures. Restaurants remain closed for in-person dining and groups of more than 10 people are still prohibited. The order is in place through May 15.

Rec. league waiting for the all clear

On the heels of Little League Baseball halting all activities this summer, Dixie Youth announced they are still deciding whether... read more