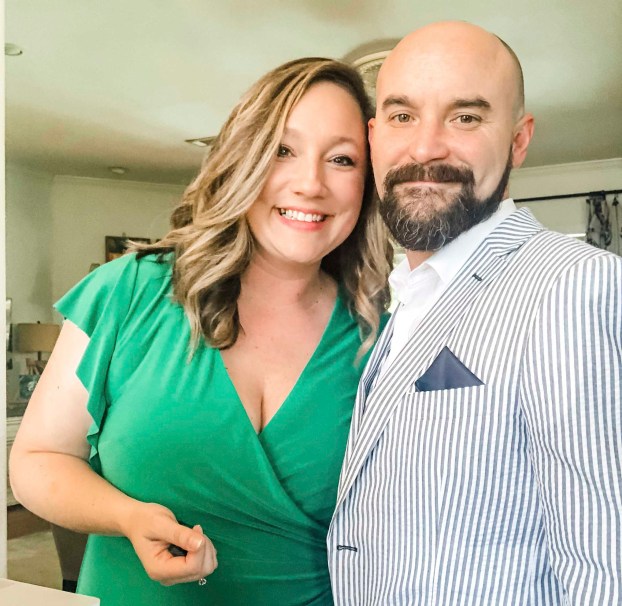 Shaunna West and Andrew Parker were married on Sunday, April 26, in a ‘Quarantine Wedding’ with her son as officiant and friends and family joining in by Zoom call. ‘Andrew and I were ready; the kids were ready, so we decided, ‘Let’s do it’” she said.

Little did she know that one day, in the midst of a pandemic, she would wed the man of her dreams in a Perfectly Imperfect ceremony.

At 5 p.m. Sunday, April 26, 2020, Shaunna West and  Andrew Parker became husband and wife in a Quarantine Wedding at their home in Palos Verdes in Troy.

The couple had planned to be married sometime in May and, although no plans for the ceremony had been set in stone, it probably would have been an intimate yet traditional wedding.

However, COVID-19 took center stage and their plans for the wedding were uncertain.

“We thought things might open back up but we couldn’t be sure,” West said. “We also knew that we probably would not be able to have a ceremony with a lot of family members and friends in one place. Andrew and I were ready; the kids were ready, so we decided, ‘Let’s do it!”

The couple’s plan for their Quarantine Wedding was for an online meeting room and their family and friends could “zoom in” and share in the happiness of their wedding day.

The wedding party and their guests would not only be able to personally be a part of the ceremony but also be able to communicate with each other. Although not the wedding the couple had planned but, given the times, it was the next best thing.

However, Shuanna and Andrew’s wedding was more than they could have even imagined, absolutely Perfectly Imperfect.

The place was secure but, at this time of social distancing, who would officiate the marriage ceremony?

“Grayson said he loves us both and he  would like to officiate the wedding,” Shaun said. “Andrew and I were touched. We told Grayson if he wanted to do it, that’s exactly what we wanted and we wanted him to decide what he wanted to say on his own.”

On Sunday morning, Shaunna and Andrew, Grayson and his sister Ava West,10, and Andrew’s daughter, Phoebe Parker, 6, spent the wedding day together.

“Andrew and I understood that because it was a second marriage for both of us, we wanted the kids to be involved,’ West said. “For the five of us to be together on our wedding day was more meaningful than we could have imagined. We had blueberry pancakes for brunch. Phoebe, our flower girl, picked flowers from the yard. There was no pre-wedding pressure, no hurrying, no stress. Just a perfect day together.”

The wedding ceremony was also perfect. With family and friends zooming, the couple stood before the young “marriage” official and, in his own words, committed to love and honor each other.

“Grayson’s words were so simple and so sweet and, for him to marry us, was the most meaningful thing to me, other than the birth of my children,” West said. “It was so special. I could barely make it through because the words reminded me of what is most important in this life.”

Ava asked the “I do” question and Shaunna’s dad, Gary Wheeler, pronounced them man and wife.

Grayson presented the happy couple to their guests.

Several friends and family zoomed blessings on their marriage and best wishes to them and their family.

“To have family and friends give us their blessings, meant the world to us,” Shaunna said.

There was a lot of interaction between the couple and their guests via Zoom.

“Visiting with our family and guest was a lot of fun with my dad cracking jokes,” Shaun said. “We all had a wonderful time. Andrew and I could not have asked for a more wonderful marriage ceremony than a Quarantine Wedding.”

The bride’s cousin, Jennifer Senn and her husband, Charlie Senn, gave the couple a symbolic “send off” with a shower of confetti. Steaks were on the grill and a congratulations cake had been dropped off by friends. “It was wonderful to share our Quarantine Wedding day with those we love and those who love us,” Shaunna said.

And, it was Grayson who gave a most memorable toast to the “Just Married” couple.

Community leaders are evaluating plans for reopening facilities in coming weeks. “As things progress over the next couple of weeks,... read more