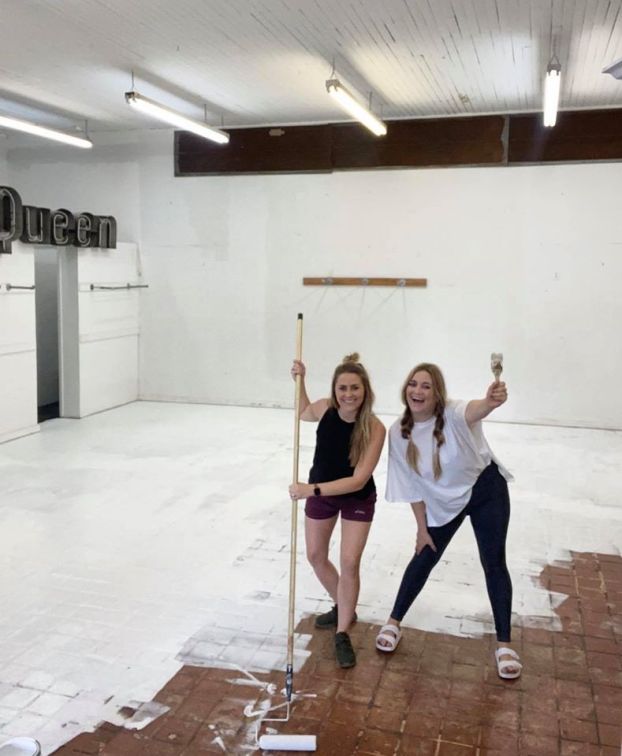 Owners Marley Park and Mallory Morgan have been using the time during the COVID-19 shutdown to refresh and remodel their store, The Confetti Crate. Morgan said the shop will open next week, by appointment, and will continue online and curbside sales as well.

Juliette Adams has been in business in some form or fashion on the Square in downtown Troy for nearly 40 years.

When Gov. Kay Ivey announced the closing of non-essential retail stores on March 27,  Adams closed the door of The Pink Parlor and immediately began to prepare for the day the governor allowed certain stores to reopen.

Ivey gave the go-ahead to non-essential retail stores for 5 p.m. Thursday. At 10 a.m. Friday, Adams will open the door of The Pink Parlor with open arms.

“I have been waiting for this day since the day I closed the door,” Adams said. “I have always walked and lived by faith, and I believed this day would come.”

Adams said she has taken every precaution in reopening the doors to her downtown business.

“I have tape on the floor for social distancing; I have masks and gloves available for my customers and hand sanitizer and Dial soap in the bathroom. The store has been rearranged to make sure that my customers are protected,” she said

Adams will open the store herself and work it for the time being.

“I’m a worker and I have missed being here and I’m looking forward to being back,” she said. “This will be a new experience for all of us.

“Abraham Lincoln said the one thing lacking in man is common sense. If we use common sense, this will work.”

David Helms said he joins his wife, Sherry, in their excitement about the opportunity to reopen.

“We supported Gov. Ivey’s guidelines but it is encouraging that the restrictions have been eased a little on retail folks and it’s exciting to be moving forward a bit,” Helms said. “With the reopening, we are taking precautions — wiping doors, social distancing and the 50 percent occupancy even though that’s not a concern for us. People shop for furniture but not at one time.”

Helms said the re-opening of non-essential retail stores is a first step in gradually bringing back other non-essential business.

“We can look forward to the continued easing of the restrictions on other retail folks,” he said. “Hopefully, people — shop owners and customers — will continue to do what is necessary to keep themselves and others safe so we can continue to move forward.”

Mallory Morgan at the Confetti Crate said “we’re going to ease back into reopening” and plan to be open at least two days next week by appointment.

Barbara Ward at Rustic Linen said she will open 9 to 11 a.m. on Monday and by appointment throughout the week leading up to Mother’s Day weekend. However, she has not made a firm decision as to what days and hours  Rustic Linen will be open.

“This is all new so we are going to wait and see how things work out before we make a decision on how and when we will be open,” Ward said.

Other downtown retail stores reportedly have plans to open. Helms said hopefully in the next week or two most retail stores on and around the Square will reopen and it will be business “almost” as usual in downtown Troy.

Out on the highway, Adams Glass Studio will reopen today at 9 a.m. and close at 4 p.m., with the same weekday hours. Sunday hours are 1 until 4 p.m.

Charles Adams said the opportunity to re-open came at a good time for him.

“With Mother’s Day coming up, maybe people will be out shopping and we can get some traffic back in the store,” Adams said. “The beach traffic is usually good for us but, with the beaches closed, we’ve really missed out.”

Adams said his hope is that people will be smart about the reopening of retail stores.

Antibody testing offers answers for some

As Alabama and the nation transition to reopening businesses and the economy, COVID-19 antibody testing is increasingly in demand. “We... read more