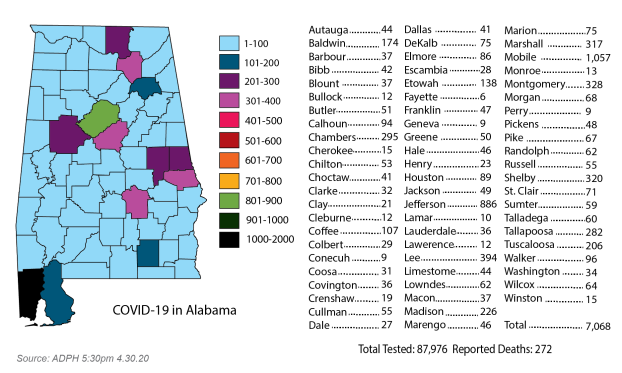 “As things progress over the next couple of weeks, we’re looking at everyone’s plans for opening some facilities that are operating virtually now or are closed,” said Herb Reeves, Pike County EMA directory. “We’re making sure everyone has plans in place to keep not only the employees safe but also the people who come in.”

“We spent (Wednesday) meeting with the folks at the courthouse, talking about how to open back up and keep everyone safe,” Reeves said. City officials have been doing the same with their departments.

The statewide Safer-At-Home order which took effect at 5 p.m. Thursday and continues until May 17 allows for the reopening of all retail stores, at 50 percent capacity, and the resumption of elective medical and dental procedures, while continuing to enforce safe distancing and restrictions on gatherings of 10 people or more.

“I think we’ve met two of the three requirements set forth by the White House for reopening our economy, but we’re not there yet,” he said.

“I know we’ve had some people asking about a death in Pike County, but that actually was a resident from another county who worked in Pike County,” Reeves said.

Amy Minor, chief clinical officer at Troy Regional Medical Center, said a part-time hospital lab employee who actually lived in Autauga County died this week as a result of the virus. “It’s a tremendous loss for our hospital team,” she said, adding that the employee had not worked at TRMC in several weeks. “We’re sensitive to his family’s loss at this time,” she said.

Minor also said the hospital will resume elective medical procedures next week, although all safety and visitation restrictions remain in place, such as not allowing visitors to accompany patients for the procedures. “We’re taking an abundance of precaution to keep our patients safe, and we want our community to know that,” she said.

Reeves said many in Pike County and throughout Alabama are watching to see what happens in Georgia, where the governor lifted restrictions and reopened businesses despite not meeting the federal criteria for reopening.

“I think people are watching our neighbors to the east to see what happens there,” Reeves said. “If they don’t see a significant spike in cases (after reopening) I think we’ll see things loosen up here … if they have a spike, we won’t loosen up.”

Troy University plans to offer in-class instruction this fall, and all campuses and locations will reopen on June 1, Dr.... read more