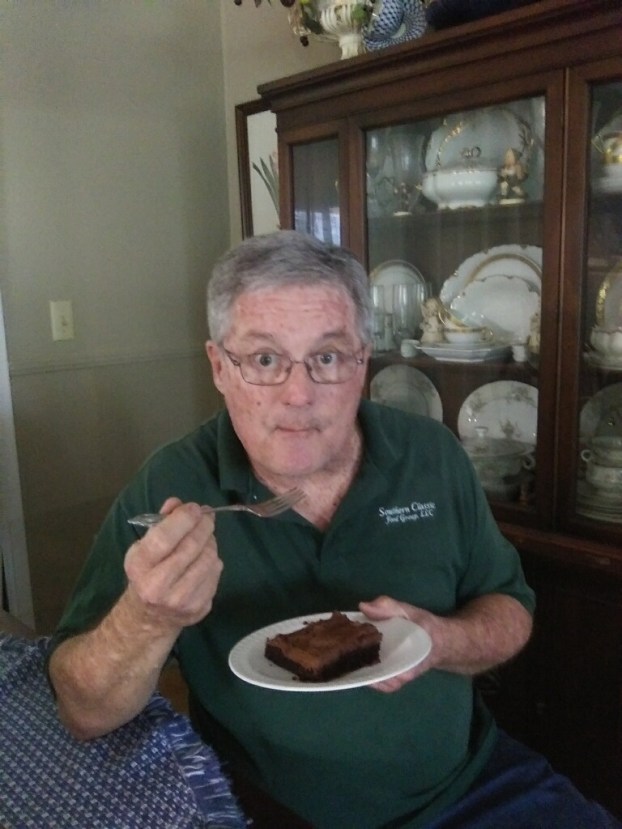 Johnny Steed enjoys a slice of Depression Cake. His wife, Cathie Brantley Steed, recreated the sweet treat from a recipe passed down through her family. Because the cake pulls from simple ingredients found in most pantries, Steed said it’s something cooks could enjoy making during the “stay-at-home” days of COVID-19.

Have the recent turn of events got you down? Do you have cabin fever? Are you at your wits’ end or at the jumping off place? Then, what you need is a big slice of Depression Cake.

Back during the Great Depression or Hoover Days, life was hum-drum and often even the hum was gone. But, somehow, people found a way to make it through. All it took to lift their spirits and bring back hope was a slice of Depression Cake.

Cathie Brantley Steed of Brundidge experienced the Great Depression vicariously through her parents, Joe and Catherine Brantley of the Banks community.

“My mother grew up in the mountains of North Alabama,” Steed said. “Their house was clinging to a mountainside. They grew just about everything they ate. They hunted for poke salad in the woods and grew corn for the grist mill.

“When Mama and Aunt Marvel were little girls, they had to walk to the mill to get the corn that had been ground into meal,” Steed said. “To get to the mill, the little girls had to cross an old log bridge. Mama said she was scared to death she was going to slip off the log and fall into the gulley below. It’s surprising what chores children performed back then.”

A sprinkle of salt was added to the corn meal for the family supper that was all too often cornbread and buttermilk, courtesy of the family cow.

“Mama said one time her family sat down to a simple supper like that and Aunt Marvel asked, ‘Mama, are we pore?’ And, yes, they were.

“Those were really hard times,” Steed said. “My mother’s grandmother lived with them and she died during the winter. It was icy cold up the mountains and the ground was frozen so hard that a grave could not be dug. So, her grandmother had to be kept in the cellar until the spring thaw when the ground was soft enough to bury her.”

For those people, those families, anything sweet was a real treat, especially in the wintertime.

“A cobbler made from peaches from a volunteer tree and gathered in the summer and slapjack syrup were special treats but, when a Depression Cake was taken out of the oven of the wood stove, it was Hallelujah! time.

Steed said a Depression Cake was something to be desired so much so that the simple, sweet cakes were just that desired on through the World War II when life was simple for country people and not too different from the way it was back during the Depression.

Many people lived on farms and had milk cows, chicken and pigs and grew their own vegetables and apples, peaches and figs.

“My granddaddy or Papaw worked in a barbershop at Black’s Department Store in Birmingham,” Steed said. “He was the favored barber for some of the well-to-do men up there, Mr. O’Neal Steele was one of them. Papaw was fortunate to have a good-paying job because he had a large family.”

“Back then, people had to make do with what they had,” Steed said. “The ingredients for a Depression Cake could be found in most family kitchens or borrowed from a neighbor. The simple little cake was a treat for any family. All that had to be done to put a Depression Cake on the table was put the ingredients in a bowl, stir with a fork and bake.”

The recipe for a Depression or Make-Do Cake is as follows:

Stir dry ingredients together and doodle three holes in the mixed ingredients.

In the middle hole, put 1/3 cup vegetable oil. Pour 1 cup of water over the entire mixture.

Stir the ingredients and put in an 8×8-inch pan or round cake pan for layers.

Bake in a 350-degree oven for 30 minutes. However, check after 20 minutes; the  cake may be done. If baking in a non-stick pan, lower the temperature by 20 degrees.

The Depression Cake is also a Friendship Cake so share it with a friend who’s also safe at home.

Allen: ‘I was not going to let the virus defeat me’

Calvin Allen, an employee with the City of Troy, was the second person in Pike County to be diagnosed with... read more