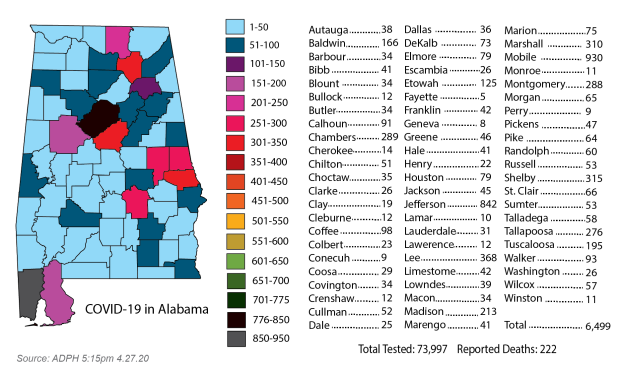 Like most other residents in Alabama, Herb Reeves is anxiously awaiting Gov. Kay Ivey’s press conference on Tuesday.

Ivey is expected to make an announcement Tuesday regarding the future of state closure orders because of the coronavirus outbreak. She and State Health Officer Scott Harris have scheduled a Tuesday morning news conference along with members of the governor’s coronavirus task force. Alabama is under a stay-home order through April 30.

“I’ve heard all kinds of things today  from we’ll be wide open to a gradual opening,” said Reeves, EMA director for Pike County. “We won’t know until the press conference (on Tuesday) … We’ll all be sitting and listening.”

Ivey spokeswoman Gina Maiola said previously that the state would probably hear an announcement early this week “as to how Alabama will gradually phase in business.”

Facing political pressure to follow the aggressive plans of other Southern states — including Georgia, which began reopening businesses Friday — Ivey had stated the decision to reopen will be driven by data.

State Health Officer Scott Harris said last week that the state at that time hadn’t quite met a White House recommendation of 14 days of declining cases before proceeding to the first phase of reopening.

The Alabama Department of Public Health reported Monday that Alabama had more than 6,530 confirmed cases of COVID-19 and more than 228 reported deaths.

In Pike County, 65 confirmed cases were reported on Monday.

“I look at our numbers here and at the state n umbers, and we’re still spiking upwards,” Reeves said. “I don’t think we’ve hit our peak anywhere in Alabama yet.”

That’s why he is hoping for a gradual or phased re-opening plan that allows for incremental progression. Once the plan is announced, Reeves said officials throughout the county will have to consider how their business or agency will be affected – from summer camps at Troy University to fall classes at schools to barbershops and restaurants and bars.

Dr. Rachael Lee, an epidemiologist at the University of Alabama at Birmingham, said Monday that there are positive signs in the numbers, but she emphasized the need for more testing to track and contain the virus.

“If you look at the case numbers per day, it appears to be slowing which is a good sign for Alabama that we aren’t seeing that high rise of cases like we were before,” Lee said.

She said while numbers in the Birmingham area have declined, they are still seeing cases and that “could potentially go up” if things are opened up too quickly.

“I personally think we still need more testing in other parts of Alabama to be able to truly say as a state that we can open up safely,” Lee said.

The Alabama Department of Public Health reported Monday that about 74,000 tests have been conducted. Alabama has a population of 4.9 million.

Ivey has signaled that any reopening would be done in phases.

For most people, the virus causes mild or moderate symptoms, such as fever and cough that clear up in weeks. For some, especially older adults and those with existing health problems, it can cause more severe illness, including life-threatening pneumonia.

‘If you were one of her customers, you were friends for life’

The death of Georgia Ziglar on Friday left all those who knew her smiling through their tears. For her family... read more