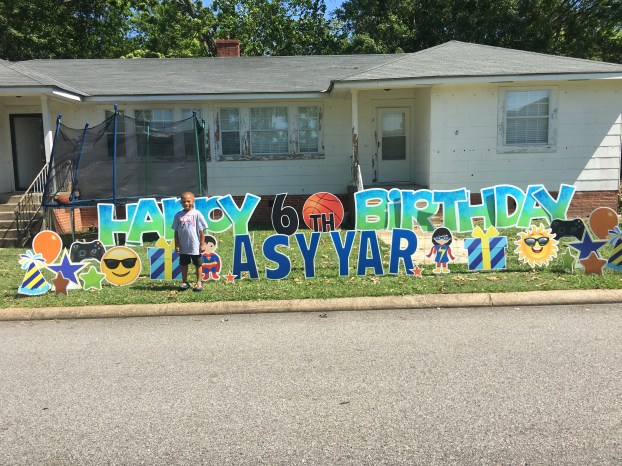 A’Syyar couldn’t celebrate his sixth birthday with friends and family because of the coronavirus health precautions, but he was treated to a drive-by parade and lots of big signs in his yard instead.

Even in today’s world of nursery school, pre-K and kindergarten, a youngster’s sixth birthday is still very special. It’s almost like being grownup because, at age six, most youngsters are going to first grade or “big school” as they say.

So, with A’Syyar’s birthday approaching, his mom, Garneshia Lampley, wanted to make it very special for him. But how?  With the number of positive testings for the coronavirus continuing to rise and the governor’s “stay home” order still in place, inviting  A’Syyar’s friends over for ice cream, cake and party fun was not an option.

“We are practicing social distancing but I wanted A’Syyar’s sixth birthday to be special so  I started  trying to think of a safe way to celebrate his special day.”

“We had family and friends that wanted to celebrate A’Syyar’s sixth birthday with him,” Lampley said. “So I thought it would be fun put up a “Happy Birthday’” sign in our front yard and have a birthday parade for his sixth birthday. That would make it very special.”

So Lampley invited family members and A’Syyar’s friends from his Banks Primary School kindergarten class to be in the parade on Gilmore Road in Brundidge.

A’Syyar was the six-year-old grand marshal. He smiled and waved to his grandparents, aunts and uncles and cousins as they paraded by. He smiled great big smiles and waved as his friends yelled “Happy ‘Birthday, A’Syyar!”

The parade vehicles came by at a snail’s pace and often stopped for presents to be delivered to the birthday boy.

“Although we didn’t request presents, A’Syyar was happy to get them,” his mom said. “I told those who called and asked about gifts, only something simple. He likes to snack while he watches TV so he got a lot of snacks.  We want to thank everyone for making his sixth birthday so special even in these very trying times.”

After the party was over, A’Syyar still surveyed the sign his mom had posted to let the world know that he is six years old.

His big smile told the story of his special day and a wonderful day it was.

“I liked the parade,” he said. “It was fun. I got presents, too, — action figures and video games and lots of snacks. I want to do it again.”

A’Syyar can look forward to many more birthdays but his sixth birthday might be the only one with a parade to be held just for him.

A drive-up COVID-19 testing clinic will be offered by the Pike County Health Department to patients who meet the testing... read more