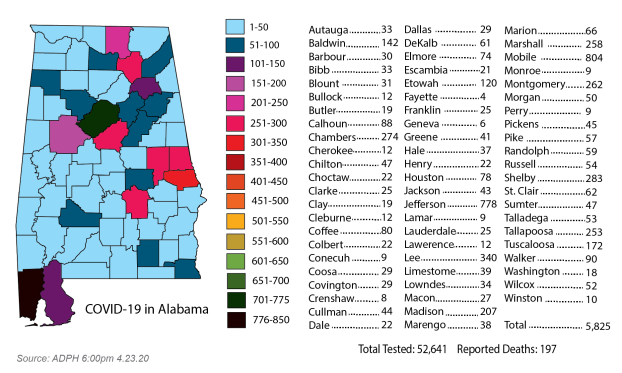 Because of privacy regulations, details about the cases in Pike County are not provided.

However, Troy Mayor Jason Reeves said it is important for residents to remember this is a “notifiable” disease.

“That means if you have come in close contact with someone who has tested positive for COVID, you will be notified by health department officials,” he said.

Community leaders had previously estimated the last two weeks of April and first week of May could see the peak of COVID-19 infections in Pike County.

“It’s important that people continue to practice self-distancing and good hygiene,” Reeves said. “I think the numbers show that what we’ve been doing is helping.”

Statewide, the COVID-19 related death rate increased on Thursday due a change in the way  change in the way the state reports deaths related the disease. The ADPH previously reported total deaths and the number of COVID-19 confirmed deaths as separate numbers. The reported deaths included information reported by local health departments and hospitals, while the confirmed deaths were those confirmed by ADPH. However, the Centers for Disease Control updated its guidance on reporting COVID-19 deaths to now include people who died with a positive COVID-19 laboratory test as well as individuals whose death certificates list COVID-19 as the cause of death.

Nationally, nearly 49,000 people have died from the disease.

Parents now have a one-stop shop for online resources to help with at-home education of their children. The Troy University... read more