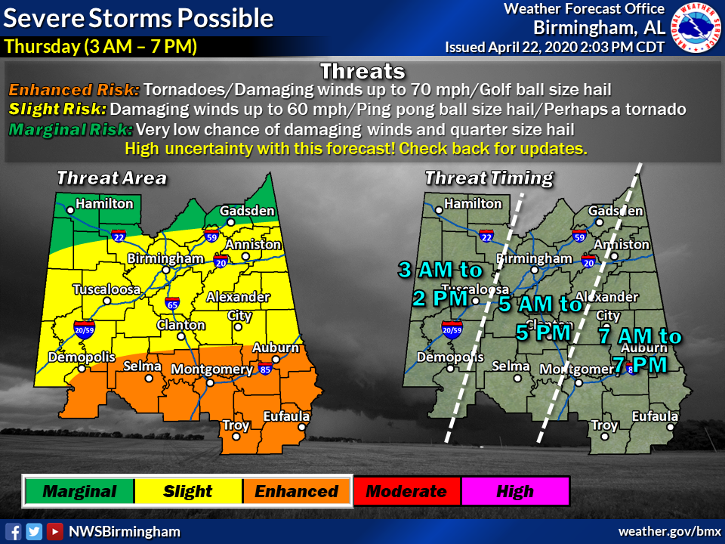 Another round of severe storms is likely in Pike County on Thursday.

The National Weather Service placed Pike Count and much of South Alabama under an “enhanced risk” for the severe storms today.

“This includes the possibility of potential tornadoes, damaging winds up to. 70 mops and golf ball size hail,” said Herb Reeves, Pike County EMA director. “The estimated timing for the storms to arrive in Pike County is between 8 a.m. and 6 p.m.”

The storms come four days after a line of severe storms brought straight-line winds of nearly 100 mph through the county, leaving a wake of destruction in their path. The storms downed trees and powerlines, ripped roofs off buildings and homes, stripped away awnings and left thousands of residents without power, some for more than 24 hours.

Troy Mayor Jason Reeves said Sunday night’s storms were “unlike anything we’ve ever seen” in their breadth.

The storms forecast for Thursday could come in two waves, according to weather experts.

The first round is expected to move through the state in the early morning, and experts said it will determine the intensity of the second round. The early morning storms may bring damaging winds and h ail.

The second round of storms could begin late morning to early afternoon, if they develop. Those storms likely would bring more damaging winds and a higher risk of tornadoes.

Reeves said emergency officials will watch the storm forecast on Thursday and, if needed, emergency shelters will be open to the public.

Those include shelters in Meeksville, at the Troy Recreation Center, and on the Troy University Campus.