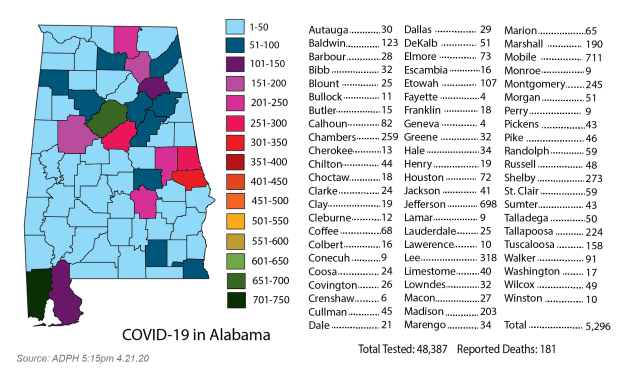 Pike County’s total of COVID-19 cases continued to increase on Tuesday, indicating the county has yet to reach its peak infection rate.

“It doesn’t appear right now that we’re leveling off,” said Herb Reeves, Pike County EMA director. “Hopefully we’re nearing our peak, but we’re not there yet.”

Reeves said public officials still cannot provide details about the local confirmed cases. “There’s a lot of speculation about who all these … people are and where they’re located, but even I don’t know who everyone is,” he said.

Troy Mayor Jason Reeves, speaking to members of the Troy Rotary Club on Tuesday via a virtual meeting, said he believes nearly 700 tests have been conducted county wide between the five testing sites. “And we’re still showing a 95 percent or greater rate of negative test results,” he said.

The mayor said he continues to remain optimistic that Pike County can remain under 100 cases of COVID-19 by April 30. “I hope that is still the case,” he said.

Reeves, like other local and statewide officials, said April 30 brings decisions about the reopening of the local and state economies, likely through the lifting of some aspects of the current statewide health order.

“I don’t expect the state health order in the form it is now to be expanded past May 1,” he said. “But it is so important that people take responsibility and think about hygiene .. and keeping a social distance …

“We’ve got to strike a balance here.”

The push to reopen the economy moved to Montgomery on Tuesday, where a group of protesters gathered outside the Alabama Capitol as Gov. Kay Ivey said she intends to keep a stay-home order in place through April, striking a measured approach as some Southern states have pushed to quickly reopen.

Ivey intends for now to keep a stay home order active through April 30 and will decide next week on what can reopen, saying the decisions will be driven by data amid public safety concerns as the global pandemic continues.

“No one wants to open up businesses more than I do,” Ivey said at a morning news conference. “All of our decisions that I’m going to make are going to come from data, not a desired date.”

State Health Officer Scott Harris said the state hasn’t quite met a White House recommendation of 14 days of declining cases before proceeding to an additional phase of reopening as the global pandemic continues.

As of 6 p.m. Tuesday, the Alabama Department of Public Health reported 5,327 confirmed cases of COVID-19, with 186 reported deaths and 697 hospitalizations.

In Pike County, 46 confirmed cases have been reported with no hospitalizations.

About 100 protesters gathered outside the Capitol on Tuesday for what was supposed to be a “driving protest” around the complex to urge a reopening of the state. Drivers, carrying American flags and signs, circled the complex. Some demonstrators got out of their cars as Montgomery police ticketed drivers for honking and closed the street in front of the Capitol.

“I haven’t made a dime of income since March 27,” said Tommy Metrock, a Tuscaloosa salon owner. Close contact businesses were among some of the first ordered closed in the state.

She said she applied for unemployment and hasnt received anything. Her family’s health insurance bill is coming due and she doesn’t know how she will pay it. “I need to work so I can cover health insurance for my family,” she said.

Dale Beach of Montgomery carried a “Don’t Tread on Me” flag as he stood outside the Capitol.

“I’m furloughed right now. I think what they are doing with the lockdown is unconstitutional to start with. I want to see this state get back to work,” Beach said.

The Alabama Department of Public Health said Tuesday that the state has more than 5,100 cases of coronavirus and 144 confirmed deaths from the virus. State health officials are investigating another 30 or so reported deaths in COVID-19 patients.

Harris said the state had been reporting 200 or more new cases a day, but now the number is under 200.

Ivey expressed concern that the testing has not been adequate but could not give benchmarks on what would be an adequate level for the state. There have been about 48,000 tests conducted in Alabama, a state with a population of 4.9 million.

“We are not testing enough yet. We are little bit less than 1 percent of our population and we need to do a whole lot more testing to get up the speed,” Ivey said.

The governor suggested last week that the opening of the economy would likely take a tiered approach, with some segments opening before others and that areas with widespread outbreaks might have more restrictions.

Ivey is receiving mixed feedback on whether to cancel or extend closure orders. The governor asked for recommendations from the state’s congressional delegation.

Rep. Mo Brooks said Monday that his office recommended an immediate end to the stay-home order.

Ivey praised people’s cooperation with the stay home order, saying that has limited the spread of the virus.

“What we’re doing is working. I plead with the people of Alabama keep doing what you are doing,” Ivey said. “It’s been a challenging month. We’ve lost too many of our loved ones and our way of life has been turned upside down. But better days are ahead. We all look forward to that.”

For most people, the virus causes mild or moderate symptoms, such as fever and cough that clear up in weeks. For some, especially older adults and those with existing health problems, it can cause more severe illness, including life-threatening pneumonia.

Pike Countians should brace for another round of potentially severe storms on Thursday. The National Weather Service on Tuesday updated... read more