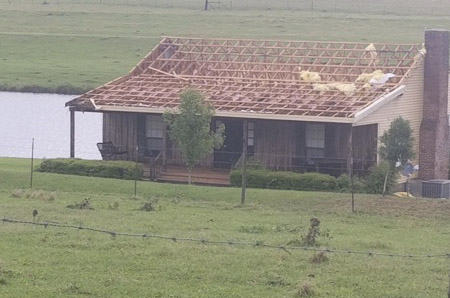 The Motes family were staying in this cabin after losing their family home to a fire a month ago. The weekend storms ripped the roof of the cabin where they’ve been staying.

One month ago, on March 19, Kenny and Barbara Motes lost their home on Burnt Out Bridge Road to fire.

On Sunday, April 19, the roof was ripped off the cabin where they were living, leaving them defenseless in a drenching rainstorm.

“I have never been so scared in my life,” Barbara Motes said. “The alarm on my phone went off and, at the same time, the window blew out and onto the bed where I was sleeping. At the same time, there was this terrible, loud noise of the roof being ripped off the cabin and, all of a sudden, it was like I was in a hard, cold shower. The rain was pouring down and pounding on me.” Motes said her first frantic thought was to get to her husband.

Her husband’s voice was the answer to her prayer and brought with it hope that, together, they could make it through the storm.

As the lightning would flash, Motes said, they could find their way around the cabin.

“Kenny called our daughter, Robin, and told her the cabin was gone. The place where we thought we would be safe was gone.”

Robin’s husband Greg came for the cold, water-soaked couple. Even then, Motes said she was overcome with fear.

“It was so horrible,” she said. “I can still hear the cracking and popping of the roof being ripped off the cabin. I guess I’ll always hear that horrible, terrifying sound. It was a nightmare.”

Motes said she believes a tornado ripped the roof off the cabin.

“Wind couldn’t have pulled the entire roof off like that. But we got out safe and I thank God that our lives were spared. And, no lives were lost when our mobile home burned. God has been so good to us.”

Motes said she has been afraid of threatening weather as long as she can remember.

“When I was a little girl and the weather was bad, I would go sit with my daddy,” she said. “He would tell me that everything was going to be alright. I know now that he was just saying that to comfort me.”

Another storm has been forecast for Thursday and Motes said she is looking for a safe harbor where she can find the same comfort that she found sitting on her daddy’s lap when she was a little girl.

Pike County saw a more 40 percent increase in positive COVID-19 cases over the weekend. As of 6 p.m. Monday,... read more