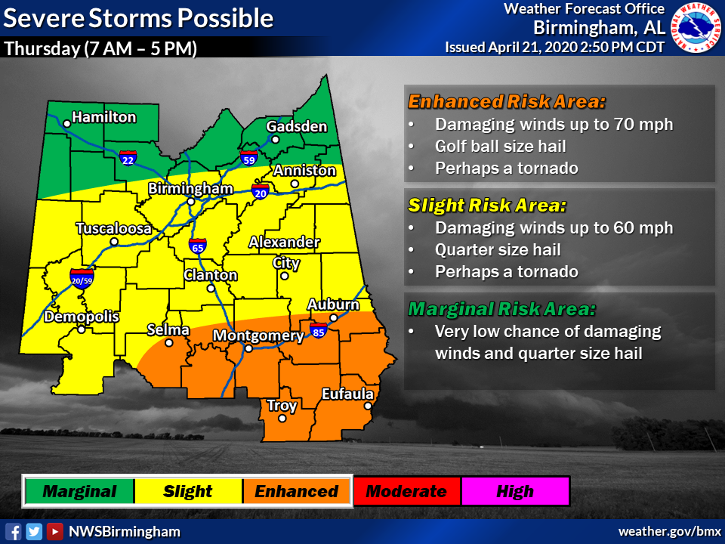 Troy Mayor Jason Reeves is fairly pragmatic about the likelihood of severe weather in Pike County.

“We live in Alabama and we just deal with weather,” he said on Tuesday.

But, the storms that blew through Pike County on Sunday were “unlike anything we have seen  – ever,” he told members of the Troy Rotary Club via a virtual meeting.

“It was almost like being hit by a hurricane from the West.”

The storms, with straight-line winds nearly 100 mph, blew through Pike County overnight Sunday, leaving a swath of destruction from Brundidge to Shellhorn, Goshen to Downtown Troy.

“I don’t think there’s a whole lot of areas in Pike County that were not touched by the storm,” said Herb Reeves, EMA director. “I thought we were going to escape the worst of it, but that last little bit took its target on South Alabama and came roaring across.”

Downed trees and power lines, ripped off roofs and awnings, and general wind damage were reported throughout the county. “The National Weather Service called me and said ‘you need to be worried about Goshen and Springhill; that’s the direction the storm is headed.

“And they came roaring through.”

At one time, more than 11,000 customers of South Alabama Electric Cooperative and 4,900 customers of Troy City Utilities were without power. Most of the power was restored by late Tuesday, but not all.

“Crews are working,” Herb Reeves said. “But not all customers are back on.”

In the city of Troy, mutual aid crews from power companies throughout the state doubled the workforce in an effort to restore power more quickly, the mayor said.

“We’ve been fortunate in the last few years because of technology and row cutting, and the fact that the storms have been on a single track, to be able to get utilities back on fairly quickly,” he said. “But because of the sheer size of this and the nature of it, we had almost 5,000 people down at one time.

“At a time when a lot of people are stuck at home and being there without power and modern technical, I know that’s hard,” he said. “I hope people can be patient with us.”

Pike Countians should brace for another round of potentially severe storms on Thursday.

The National Weather Service on Tuesday updated the risk for potential storms from marginal to enhanced for Pike and surrounding counties.

“There is still uncertainty about timing and strength of the system,” said Herb Reeves, Pike County EMA director. “The main threats are currently straight-line winds with tornadoes.

“However, if atmospheric parameters continue to increase, there would also be a more substantial increase in severe weather, including strong tornadoes.”

The estimated timing for the storms is 11 a.m .to 8 p.m. Thursday, although Reeves said that timeline likely would be updated as we get closer to the event.