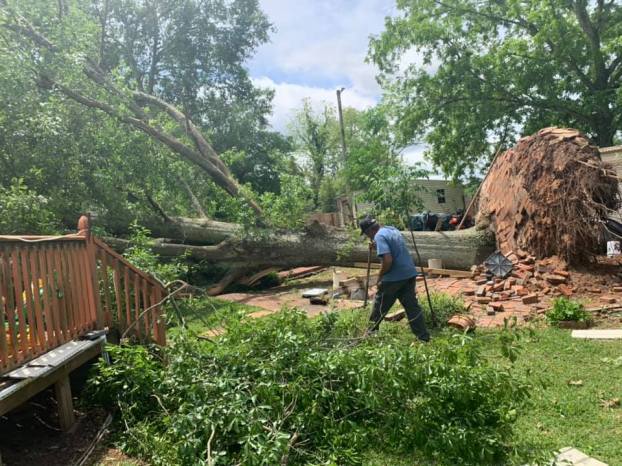 Photo Courtesy Willie B. Williams Cleanup from the devastating straight-line wind storms continued throughout the day on Monday. The storms toppled trees and power lines, ripped roofs and awnings off buildings and left thousands of county residents without power.

Deadly storms that blew across the South overnight Sunday left a wake of downed trees, property damage and power outages in Pike County.

“These are the most widespread power outages we’ve seen in our county since Hurricane Opal,” said Troy Mayor Jason Reeves.

At one point early Monday morning, Reeves said some 4,900 customers of the Troy City Utilities were without power, and some may not see power restored until Tuesday.

Power outages were reported in Brundidge and throughout Pike County as well, with South Alabama Electric Cooperative reporting more than 11,000 customers without power at one time. By 6 p.m. Monday, SAEC reported more than 6,100 members still without power.

The National Weather Service in Birmingham on Monday reported straight line winds of up to 95 mph in Pike and Barbour counties, resulting in “a wide area of damage consisting of snapped and uprooted trees, some onto structures.”

Awnings, carports, roofing materials overhangs and more were damaged throughout the county. In downtown Troy, several businesses experienced damage, including Walt’s Gym, with part of the building blown into the street; awnings and roofs ripped off buildings; and trees uprooted.

Reeves said the swath of the damage was incredibly wide, “reaching from one end of the city limits to the other … it affected places in Troy that are miles and miles apart.”

“It’s frankly everywhere,” he said, adding that “we just really appreciate the patient of the public as we try to get power restored.”

Jerry Oliver Williams, 61, died late Sunday night when winds flipped the home Williams shared with his wife and child in a rural Alabama county, authorities said. The area was under a tornado warning at the time.

“He was in a mobile home, and the mobile home was destroyed by a tornado. He was in the wreckage of the mobile home. His wife and child were with him, and they were OK,” said Coroner Derek Wright of Alabama’s Henry County.

A suspected twister also resulted in one death in Marion County, Mississippi, said Coroner Jessie Graham. Jerry Johnson, 70, died when his home took a “direct hit” from the storm in the Sandy Hook community, Graham said.

The National Weather Service said it had received reports of large hail and broken power poles in the area, and emergency management officials said 20 homes were damaged.

In south Georgia, Wilcox County Coroner Janice Brown a 95-year-old woman died in a house fire early Monday that the state fire marshal’s office suspected was caused by a lightning strike. Heavy storms were in the area at the time, said Brown, who declined to identify the victim since extended family members hadn’t been notified.

The deaths came as firefighters worked through storms to contain a blaze at the main music building at the University of Alabama in Tuscaloosa. Authorities haven’t determined the cause of the fire, but it happened while strong storms with lightning were in the area.

Firefighters saved most of the instruments and uniforms belonging to Alabama’s “Million Dollar Band,” Mayor Walt Maddox said in a tweet.

Rainfall totals in excess of 2 inches (5.08 centimeters) were widespread, and isolated spots in central Alabama received more than 8 inches (20.32 centimeters) of rain in a day, the weather service said.

More than 35,000 homes and businesses in Alabama and Mississippi were still without power around noontime Monday.

The Storm Prediction Center received more than 250 reports of possible tornadoes, high winds, hail and storm damage from east Texas to central Florida on Sunday and Monday. A tornado touched down on Interstate 75 in north Florida, tossing a portable building being hauled by a truck into a nearby pickup truck, where the driver suffered minor injuries, authorities said.

Teams from the National Weather Service will assess tracks to determine where tornadoes struck.

The storms hit a week after a two-day outbreak of more than 100 tornadoes that began Easter Sunday killed at least 36 people across the region.

Pike Liberal Arts senior Ansley Adams was routinely at the school from the early morning hours to the early evening.... read more