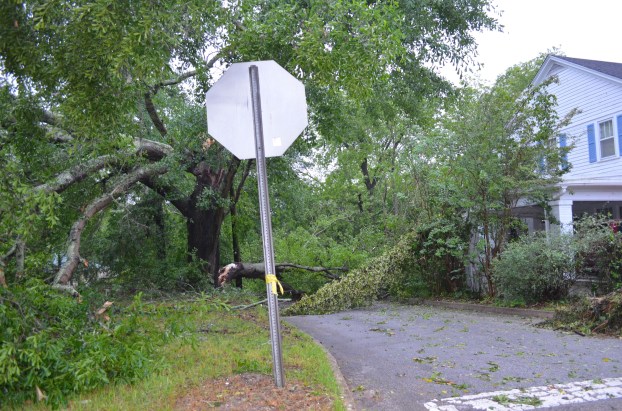 Downed trees and power lines were seen throughout Brundidge on Monday, where officials said the city was blessed to have weathered the storm with no major injuries reported.

That’s how Brundidge Mayor Isabell Boyd described the town of 2,076 in the aftermath of the straight-line winds that stormed through the city late Sunday night and in the early hours Monday morning.

“The real blessing was that no-one was injured and no homes were destroyed or heavily damaged,” Boyd said. “It could have been a lot worse. So, yes, we were blessed.”

Boyd said several mobile homes in the Boyd Mobile Home Park on the north side of town received heavy damage. And several awnings were damaged at businesses and homes.

Power lines were down throughout the city resulting in a continuing power outage. Trees were down in most all areas of the city and several streets were closed while city workers removed the trees and debris.

“Our utility department has been on the job since the early hours and we’ll get the power back on as soon as possible,” Boyd said. “But the power outage is widespread so it’s going to take some time. We ask our citizens to just be patient. We’ll get there.”

Boyd said a power company in Georgia is sending a crew to assist with getting the power back on and that will be a tremendous help and is most appreciated.

The mayor  said she is saddened that most of the trees in the pecan orchard that fronts  Ramage City Park along South Main Street were uprooted.

“If any of those trees are still standing, I didn’t see them early this morning when I was down that way,” she said. “The city had purchased that property as an addition to the city park. It was such a pretty area and we had great plans for it. We’ll have to go back and review those plans that could be even better than the original ones. We have a lot of work to do but we’ll face that challenge in the near future.”

Boyd said Brundidge residents are encouraged to do their part in getting their personal property back in order.

“The city will pick up the limbs and debris as soon as possible,” she said. “We ask that the limbs be placed along the street in an orderly way and not scattered all up and down the street. Getting everything back to order is going to take time and all of us working together.

“This wind storm  could have been much worse so let’s just be thankful for our blessings.”

Boyd said Brundidge is a great city with wonderful and caring people.

“Working together, we’ll get our town back in order and, hopefully, we will make improvements to our downtown and residential areas that will make our city better than before.”