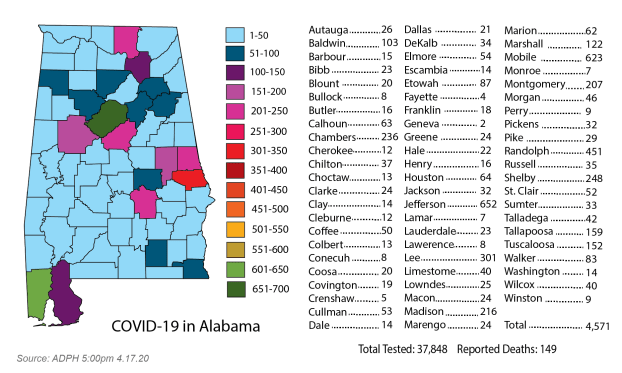 ‘We can’t afford another shutdown’

As lawmakers on a state and national level call for reopening the economy, public health officials continue to urge caution and social distancing.

“Personally, I don’t think two more weeks is going to make or break it,” said Herb Reeves, Pike County EMA director. “I know the businesses are suffering, and I am by no means anti-business. But what I don’t want to see happen is us open everything up to soon and then the cases peak and we have to shut down again.

A group of lawmakers led by Lt. Gov. Will Ainsworth on Friday released a call to Reopen Alabama Responsibly, urging the reopening of restaurants, retail stores, barbershops, beaches and other businesses open immediately under special social distancing guidelines. The task force also called for the opening of dentists and optometrists by May 1 and the reopening of youth baseball and softball by May 11.

Of particular note in the Reopen Alabama Responsibly proposal is the unfair restrictionsplaced on small businesses while big box retailers continue to operate successfully.

“That’s the been the problem the whole time,” said Troy Mayor Jason Reeves, who serves on the 2nd Congressional District task force also examining how and when to reopen the economy in Central Alabama.

“There are aspects of this economy that have been allowed to function during this stay home order and some aspects have not,” Mayor Reeves said. “In the end, social distancing and hygiene will be necessary to whatever we do … we just have to figure out what makes sense when it comes to reopening these businesses.”

The call to reopen the economy echoes that of President Donald Trump, who has said this week that the states should reopen on their own timelines as they deem possible.

Gov. Kay Ivey, who commissioned the Small Business Emergency Task Force led by Ainsworth, said Friday she would consider the recommendations but does not have plans to immediately reopen any businesses affected by the stay-at-home order, which is in place until April 30.

“I’ve already sent this report to the Executive Committee of the Coronavirus Task Force, which I created, and I know they will begin looking at these suggestions and start plugging them in, where appropriate, as we weigh all our options about opening up the economy,” Ivey said in a statement today.

“On a call with the president and vice president yesterday, President Trump made it clear that this will be a gradual process, even as he said that our nation’s governors will be responsible for leading these efforts and that his Administration will continue to stand by us as we do this,” she said. “Consistent with what we’ve been saying all along, the president made it clear that the return to ‘normal’ won’t be a quick or simple process. We will need to see declining cases – and stronger testing – over at least 14-days – to make certain we don’t see a return in the spike up of the infection.

“In addition to the report from the Small Business Commission, I also look forward receiving reports from our seven members of Congress by the middle of next week. We’re also getting feedback from the mayors of our 10 largest cities – as well as a lot of other good suggestions – and our Executive Committee is already looking into many different ideas and plans. No good idea will be tossed aside, but even as we look at every way we can to reopen the economy, we’re going to need to continue to maintain social distancing and other health measures to ensure the virus doesn’t flare up again.”

Herb Reeves said he hopes “we are climbing up to our peak and are going to level off soon.”” Cases have increased almost daily this week, and he said those increases are likely to continue for another one to two weeks, due to lags in testing.

“Social distancing has made a difference,” he said. “If you think about all the places people gather, and realize that we’ve haven’t been doing that, it makes a difference: churches, concerts, ballfields … people aren’t gathering together so there isn’t an opportunity to spread the virus.”

“I think you have to weigh whether it is better to open now or wait two weeks and see if things have tapered off then.”

On Thursday, the president detailed a three-step set of guidelines for easing restrictions over a span of several weeks in places that have robust testing and are seeing a decrease in COVID-19 cases, assuring the nation’s governors: “You’re going to call your own shots.”

Some states did take some of the nation’s first, small steps toward loosening restrictions.

In Florida, GOP Gov. Ron DeSantis gave the green light for municipalities to reopen beaches and parks if they can do so safely. In Texas, Republican Gov. Greg Abbott said stores can begin selling curbside, nonessential surgery can resume and state parks can reopen.

But governors of both parties Friday suggested they would be cautious in returning to normal, with some of them warning that they can’t do it without help from Washington to expand testing.

Michigan Gov. Gretchen Whitmer, a Democrat who has been critical of the government’s response to the crisis, acknowledged that people are “very anxious” about their livelihoods and worried about paying the rent when they are out of work.

“But the last thing I want to do is to have a second wave here, so we’ve got to be really smart,” she said.

West Virginia Gov. Jim Justice, a Republican ally of Trump’s, endorsed the White House plan but made clear that he will listen to medical experts in deciding how to move forward. He said more testing is needed before any restrictions can be rolled back.

“I am not going to do something that I feel in my heart is the wrong thing that’s going to endanger our people,” he said.

Even in largely rural states with small populations, like Wyoming, Maine and South Dakota, governors said they were not anxious to quickly resume business as usual.

“Until we’ve got the testing up to speed — which has got to be part of the federal government stepping in and helping — we’re just not going to be there,” said Wyoming Gov. Mark Gordon, a Republican.

Worldwide, the outbreak has infected more than 2.2 million people and killed over 150,000, according to a Johns Hopkins University tally based on figures supplied by government health authorities around the globe, though it has becoming increasingly clear that the true numbers are much higher.

The shutdowns have inflicted heavy damage on economies around the world. In the U.S., the crisis has cost at least 22 millions Americans their jobs, pushing the unemployment rate toward levels not seen since the Great Depression.

Public health experts have warned that an easing of the shutdowns must be accompanied by wider testing and tracing of infected people to keep the virus from coming back with a vengeance.

On closing: ‘There was no reason to lose money’, owner says