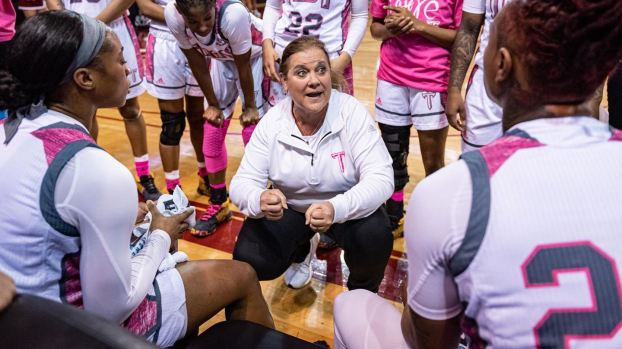 TROY, Ala. – Troy women’s basketball head coach Chanda Rigby announced the signing of two student-athletes to National Letters of Intent in the second signing period that began on Wednesday. Both student-athletes will join the Trojans for the 2020-21 season.

Joining the 2019-20 Sun Belt Champions next season will be two highly touted junior college transfers in Felmas Koranga and Dominique Camp. Koranga and Camp will join an already strong recruiting class that feature five freshmen in Samira Moore, Janiah Ellis, Sharonica Hartsfield, Jelissa Reese and Kennedi White as well as junior college transfer Agustina Talasimov. The eight-person class will be one of Rigby’s largest signing classes since taking over the program back in 2012 and you can learn more about the whole class by clicking HERE.

Koranga made history on Wednesday when she signed her NLI to play for the Sun Belt Champions, becoming the first female born in Kenya to play NCAA Division I basketball. The 6-1 forward comes to Troy after a stellar junior college career where she was ranked as the No. 2 JUCO recruit in the country by World Exposure WBB. The highly rated signee was named the 2020 WBCA Two-Year Player of the Year and a First Team All-American by both the WBCA and the NJCAA. Felmas earned All-America honors this past season after averaging 19 points and 13.1 rebound per game in 31 starts while notching 26 double-doubles. She averaged 14 points and 10.5 rebounds as a freshman to earn NJCAA Second Team All-America honors while being named the Region 14 Freshman of the Year. In just two years at Tyler Junior College, Felmas scored over 1,000 points and grabbed 750 rebounds. While playing for the Kenyan National Team Felmas was known for grabbing rebounds as she was the top rebounder for her country.

“Obviously, to sign the WBCA Two-Year College Player of the Year would be a highlight of any coaches’ recruiting career and Felmas Koranga is definitely a highlight. Her 26 double-doubles last season proves that she fights just as hard for rebounds as she does to score. As outstanding as her career has been so far, she is even more outstanding as a person. She is gracious, giving and grateful and though those qualities will not show on any stat line, I am just as excited for her to contribute those qualities to our culture.”

Get To Know Dominique Camp

Camp comes to Troy as a decorated junior college player after earning Ohio Community College Athletic Conference First Team All-Conference and All-District XII honors while also being named the OCCAC Defensive and Co-Freshman of the Year this past season. While at Sinclair CC Camp started 27 of the 29 games she played in averaging 19.1 points and 8.9 rebounds per game. The 5-9 guard had a knack for finding the open shooter with 193 assists, 6.7 per game. Her 193 assists were also the third most in the nation. Camp prepped at Lakota West High School where she was an Ohio-Kentucky All-Star and a District 15 All-Star while earning All-GMC 2nd Team honors. In 2019 she helped lead her team to a 23-3 record, a GMC and Sectional Championships.

“We are so fortunate to be able to sign Dominique Camp during this COVID-19 crisis. Due to travel restrictions, we never got to go meet her in person or bring her to visit Troy. She is our last signee of this 2020 class and she really checked so many of the boxes we needed. She is a scoring and rebounding guard with great size and she possesses an uncanny ability to get the ball to her teammate that is in the best position to score while also taking a great deal of pride in helping her team defensively. We are thrilled to have Dominique join our Trojan family.”

The Troy softball team had one of their better starts in program history in 2020. Their starting pitcher was one... read more