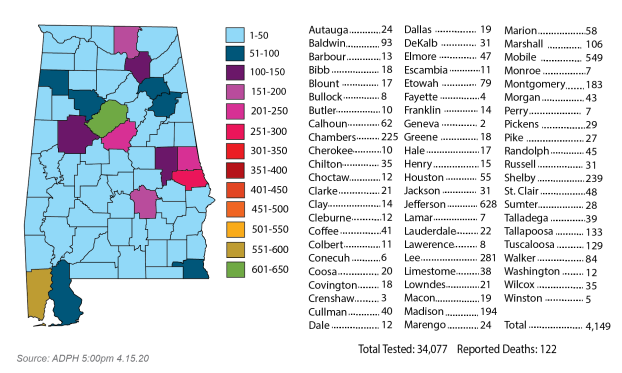 The reported number of confirmed COVID-19 cases in Pike County jumped to 27 on Wednesday, a 23 percent increase over Tuesday.

“While we don’t have all the specifics, I do not believe this is related to any particular event,” said Herbert Reeves, EMA director for Pike County, adding that the jump could relate to timing on testing results.

According to the Alabama Department of Public Health’s website, the total number of tests conducted in Pike County is 286, but those totals do not reflect all tests from private labs.

Troy Mayor Jason Reeves said on Tuesday that the five testing sites in Pike County have together completed about 500 tests since the beginning of the outbreak.

As of Tuesday, no hospitalizations and no deaths were reported in Pike County.

Of the positive cases, 525 have required hospitalization; 219 were in ICU units; and 134 were on ventilators.

Among those, 653 of the individuals confirmed are healthcare workers; 197 are long-term care employees; and 225 are residents of long-term care facilities.

According to the Associated Press tallies, more than 3,600 deaths nationwide have been linked to coronavirus outbreaks in nursing homes and long-term care facilities.

In Pike County, only one confirmed case of COVId-19 has been reported at a nursing home: Troy Health and Rehabilitation.

Water will find a way to get underground and, when it does and opens a cavity, then, there is an... read more