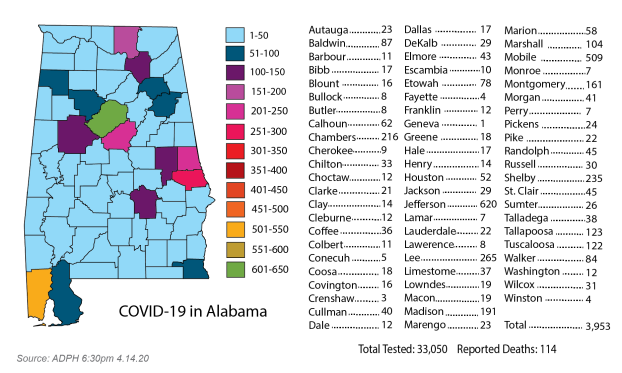 ‘Don’t let the hard work be for naught’

Even as they praised the efforts of city employees and the public to practice social distancing and safe measures, Troy officials on Tuesday urged everyone to remember that the dangers associated with the spread of the COVID-19 virus continue.

“From a city services standpoints, folks are doing a great job in regards to stay safe … but we don’t need to let all the hard work we’ve done and the sacrifices we’ve made be for naught.”

“And we had not hospitalizations,” he said.

Statewide, the Alabama Department of Public Health reported 3,953 confirmed cases of COVID-19 at 6 p.m. Tuesday, with more than 33,000 tests conducted and more than 490 hospitalizations. Reported deaths total 114, and the ADPH has confirmed that 73 of those people died from COVID-19.

“You know, I say every time … these are not just numbers, they are people,” Reeves said. “And we need to remember that.”

Earlier on Tuesday, Alabama Gov. Kay Ivey urged people not to let their guard down on precautions intended to slow the coronavirus outbreak, but was noncommittal whether some closures would have to be extended through May.

Ivey said at a news conference that she wants to reopen the state economy as soon as possible. But she suggested that, as other states have signaled,  may happen in a piecemeal approach.

“I’m personally grateful so many people appear to be staying at home and taking the order to heart. All indicators suggest that it appears to be working. I cannot overemphasis enough — in fact it is imperative — that we keep doing what we are doing,” Ivey said in her appearance at the Alabama Capitol.

She said it was too soon to predict which closure orders would be lifted, and which remain, when the stay-home order expires at the end of April.

She said she is consulting with the state’s congressional delegation. She said a state committee will arrange a timeline for reopening.

The Republican governor stressed economic concerns, noting that more than a quarter million people have filed for unemployment in the state in the past four weeks. Some national health experts warn it is still too early to reopen economic activity.

“We can take both the economic health and the well-being of our state seriously,” Ivey said.

State Health Officer Scott Harris said the hospitals have more than 400 COVID-19 patients and are testing other hospitalized patients.

At this point, Harris said, officials believe the state should have an adequate number of hospital beds to handle the outbreak in the coming weeks

“Our predictions look at lot better than we first thought … The reason that has changed is that people are taking seriously the order to stay at home,” Harris said.

For most people, the new coronavirus causes mild or moderate symptoms that clear up in a few weeks. For some, especially older adults and those with existing health problems, it can cause more severe illness and even death.