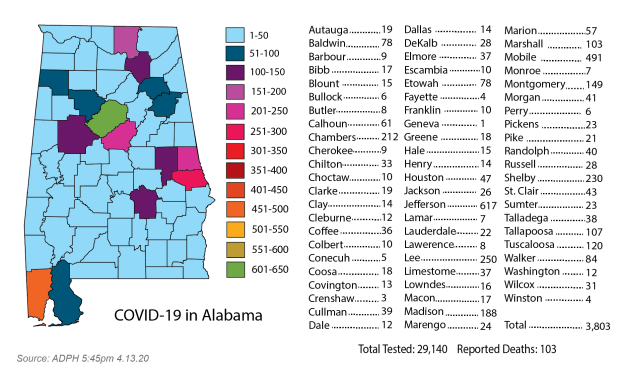 The Alabama Department of Public Health reported 3,734 confirmed cases statewide as of 6:30 p.m. Monday, with 99 reported deaths and 457 hospitalizations.

In Pike County, none of the cases have required hospitalization and no deaths have been reported.

Pike County Administrator McKenzie Wilson said on Monday that the Pike Area Transit System on Friday will restrict transportation services to dialysis patients only. “We received an email from PATS Director Donte Frazier saying that in order to protect their employees and the patients, PATS would only provide transportation for dialysis patients through April 30,” she said at the Pike County Commission meeting.

Also, representatives of Arrow Disposal, the contractor for Pike County garbage collection, notified the commission that employees will not accept any bags or additional garbage not inside the waste bins. “Before they would pick up bags or extra items, but they’re trying to keep their employees safe and only want them handling the cans,” said Commission Chad Copeland.

For more than two hours on Friday and Saturday, “big rigs” were making “pit stops” along Highway 231 north in... read more