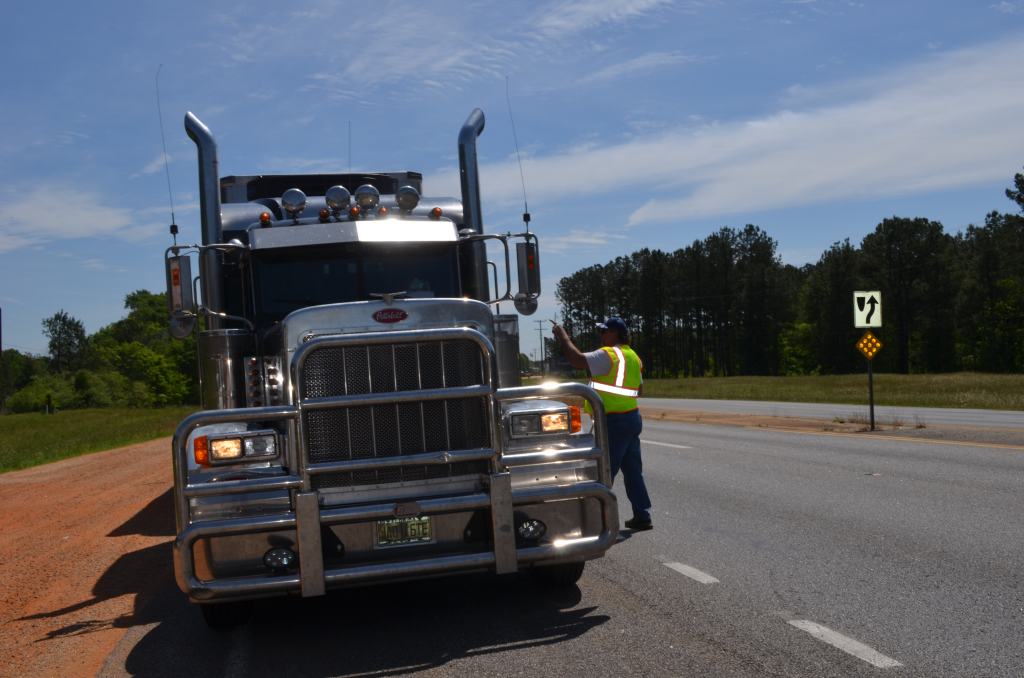 Volunteers passed out nearly 500 sack lunches to truckers on U.S. 231 last Friday and Saturday in an effort to say ‘thank you’ to the men and women who are transporting essential items these days.

For more than two hours on Friday and Saturday, “big rigs” were making “pit stops” along Highway 231 north in Brundidge to actually “grab” a sack lunch offered to them as a way of saying “thank you for keeping on trucking.”

“Many of the truckers said they had been driving big trucks for many years and they had never seen anything like what we were doing,” Ken Breon said. “One trucker said he had been  driving for more than 30 years and, never before, had anyone  said, ‘thank you.’ Driving a semi is a tough job and these drivers are helping keep America moving. We need to say thank you.”

Each day, 220 sack lunches that included a barbecue sandwich, chips and bottled water were handed “up” to truckers as they made the quick stops.

Not all truckers were able to stop but they singled “thank you” with a blast of the horn or a “thumbs up.”

“That let us know the truckers appreciated being recognized for all they do for all of us, Breon said. “We’ll be back out there this weekend, on Friday and possibly Thursday, depending on donations.”

“Some of the truckers asked if we needed donations and I said, not from you guys,’” Breon said. “We received donations from motorists who stopped and wanted to be part of thanking the truckers. We can’t say thank you enough to Lowe’s for providing the chips, Horn Beverage for the bottled water and Hook’s for cooking the meat and packaging it and making it affordable for us.”

The Brundidge Police Department directed traffic and their support and assistance was  greatly appreciated, Breon said. “They did a great job and we want them to know how much we appreciate it.”

The Breon brothers said all Americans owe a debt of gratitude to the men and women who are going the extra mile to keep America going.

Those who would like to make a donation to the “Free Food for Truckers” appreciation this weekend may do so at Hook’s in Troy and the Brundidge Police Station.