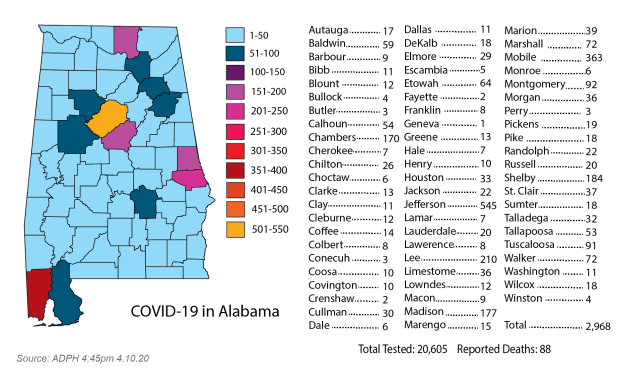 That’s the message from local leaders as Pike County enters an Easter weekend that will challenge adherence to stay-at-home orders and social distancing measures designed to prevent the spread of COVID-19.

“The rules of the state health order do allow for drive in Sunday services, but we have got to be careful or we could be in a situation relative to the spread of COVID-19 that could be a very serious problem,” said Troy Mayor Jason Reeves.

As of Friday afternoon, Pike County had 18 confirmed cases of COVID-19, according to the Alabama Department of Public Health, with no hospitalizations and no deaths reported. Statewide, Alabama reported had more than 3,000 confirmed cases with 80 reported deaths and 368 individuals hospitalized.

“This thing is nowhere close to being over,” the mayor said.

“People can get complacent with this, especially if you listen to the national media and making plans to rebound the economy,” said Herbert Reeves, Pike County EMA director. “I actually hope that can happen … but if we think we’re going to get to April 30 and we’re going to lift everything and we go back to normal, we’re going to be caught in a situation where this could come back.”

And the EMA director said the restricted stay-at-home lifestyle can begin to wear on the public, and that combined with the relatively low reported rate of confirmed cases in Pike County could create a false sense of complacency.

“The longer it goes on, the more complacent we could get,” he said, adding that it is important to remember Pike County’s peak infection phase is projected to be within the next two weeks. “And if you look at Mobile, they spiked significantly in the last few days. They’re now the second highest rate in the state, behind Birmingham.”

Mayor Reeves was more direct. “It’s the absolute worst thing we can do,” he said. “We will have wasted everything we have sacrificed at this point if we backslide … the only reason we’re seeing some of these numbers appear to level off is because the social distancing measures are working.”

The mayor and EMA director said they continue to stress the importance of staying at home, social distancing and proper hygiene until at least April 30, if not beyond.

“For everyone’s health and for the health of the economy, we can’t let up, especially not now,” Mayor Reeves said.

Community shelters likely will be opened on Easter Sunday to provide refuge for Pike County residents as severe storms are forecast for the county.

Herb Reeves said the Meeksville shelter and the Troy Recreation Center would be opened on Sunday for local residents.

“Right now, we’re still projected to have severe weather late Sunday afternoon and into Sunday evening,” he said on Friday. “We should have more information on the timing (Saturday morning) but it looks like the storms could come through after dark, and that is always dangerous.”

The Storm Prediction Center has added a not-often-used moderate risk for part of west and central Alabama for Sunday, which is Level 4 out of 5 severe weather risk categories.

The forecast anticipates 2 to 2.5 inches of rain for Sunday, and along with that the possibility of flash flooding.

For more information or to report severe weather, contact the National Weather Service Birmingham at 205-664-3010 or visit Weather.gov/bmx/.

We will continue to provide updates and forecasts at www.troymessenger.com.

With high school and collegiate baseball shutdown for the rest of 2020, there is still hope that baseball will be... read more