Locals leaders ‘not seeing a big surge yet’

As Alabama’s statewide cases of COVID-19 continued to climb on Thursday, Pike County officials continued to make plans for a potential surge in local cases in upcoming weeks.

“We are seeing some increase, but not the rate of increase we are seeing in other counties,” said Herb Reeves, EMA director for Pike County.

As of 5 p.m., the Alabama Department of Public Health reported 18 confirmed COVID-19 cases in Pike County, an increase of two from Wednesday. Statewide, the ADPH reported 2,810 confirmed cases, with 77 reported deaths and 333 hospitalizations.

“We’re not seeing a big surge yet,” she said. “And thankfully, our emergency and in-patients are down, so that is helping.”

Because both TRMC and SARHA act as regional centers, Troy Mayor Jason Reeves said some of the positive results from collections at those facilities are recorded as confirmed cases outside Pike County. The ADPH records the confirmed case in an individual’s county of residence, not where the test is collected.

“That could lead to some confusion,” he said.

Reeves said state public health officials are exploring options for alternate care facilities, should demand for hospital beds increase in coming weeks beyond existing capacity. “They’re concerned that in the next couple of weeks we could see a surge in patients needing hospitalization,” he said. Potential sites available in Pike County could include residence halls or the arena on the Troy University campus, he said. However, decisions will be made on a regional basis and other sites being considered also include closed hospitals in Florala and Georgiana.

“We’ll know a little more next week,” he said.

In addition to planning for a potential surge in COVID-19 cases and hospitalizations, Reeves and emergency officials on Thursday began planning for an anticipated round of severe weather on Sunday.

“We are in line for some potentially severe weather on Easter Sunday,” Reeves said. “Right now, we’re at a 30 percent risk of severe weather, and that will probably be updated on Saturday.”

The National Weather Service on Thursday warned that the Sunday storms could include tornadoes, damaging winds, hail and heavy rain. The system is expecte to move through the state on Sunday afternoon. 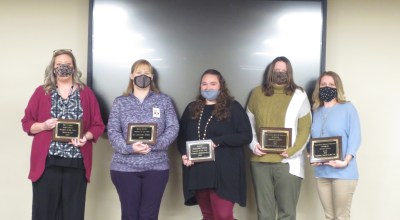 County Teachers of the Year