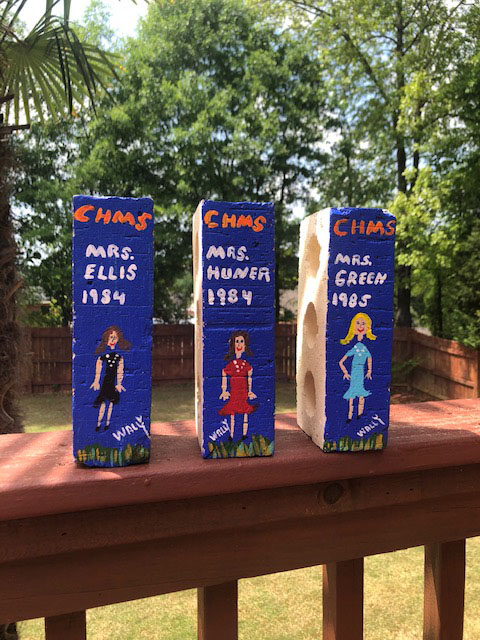 Messenger photo/submitted These three bricks from Charles Henderson Middle School are painted in honor of three of the teachers who made the biggest impact on Wally Lowery during his time at the school. The Troy-based folk artist says the coronavirus has given him more time to explore painting projects like these.

The world abounds with stories. “Just tell the stories.”

During this time of self-isolation, Lowery has found time to continue telling stories through art. However, he admits that his latest work was prompted, not by the coronavirus pandemic, but by three dusty bricks that have languished in his storage unit for nearly 15 years.

“I had forgotten all about the bricks until just the other day when I found them pushed way back in the storage unit,” Lowery said. “When the Charles Henderson Middle School building was being demolished about four years ago, I was walking around up there one evening and came across several bricks that had not been crushed by the crane. I picked them up, why I don’t know.”

“I went to middle school there and have a lot of memories of those years,” Lowery said. “But at the time, I had no thoughts of doing anything with the bricks except — saving them, I guess.”

Even when Lowery rediscovered the bricks in the storage unit, he was not inspired to use them as canvases. The inspiration came later.

“The thought came to me to paint three teachers at the middle school that had lasting influences on my lives – Ann Huner, who taught English;  Dot Green, math; and Martha Ellis, science. Of course, there were other teachers that impacted my life but these three stand out because, not only were they great teachers, but they went above and beyond for all of us. As a member of Generation X, Lowery said he wasn’t bad, just into mischief.

“But, no matter what I got into and how many times I was sent to the office, they loved me still,” Lowery said, laughing.

Although, Lowery sells much of his folk art, these bricks aren’t for sale.

“They are gifts to three teachers who made a difference in my life,” he said. “They are my way of saying ‘thank you’ for teaching me and caring about me.”

Many of Lowery’s “Wally Art” pieces also say “thank you” to  others who have influenced his life. And, some of it’s just for the fun of it but all of it tells a story.

It’s not Picasso or Homer but it’s a story, whether it’s about President Donald Trump and his trademark hair-do or the late Sam Adams’ peanut roaster or a neighbor down the street, Wally-art tells a story – about people, places and things. And, he says when the inspiration comes, he’ll tell a story about the virus that brought the world to a stand-still and, for sure, it will be a humdinger.

A resident at a Troy nursing home facility has tested positive for COVID-19. Troy Health and Rehabilitation was notified on... read more