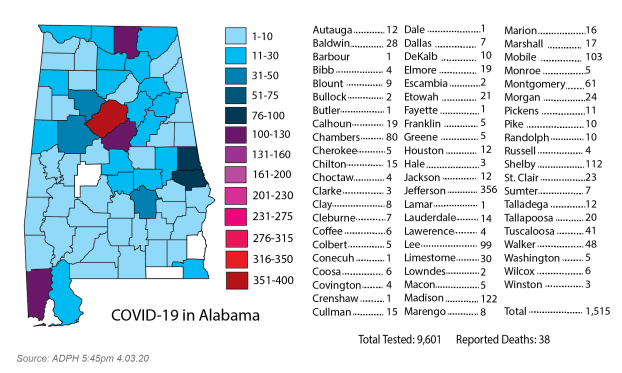 Ten cases of COVID-19 hade been confirmed in Pike County, as of 6 p.m. Friday.

According to the Alabama Department of Public Health’s website, a total of 110 tests have been completed in the county by the ADPH labs, with no reported deaths.

Statewide, the ADPH is reporting 1,515 confirmed cases and 9,601 total tests,. There have been 38 COVID-19 related deaths reported to the state; health officials so far have confirmed 21 of them.

Details about the Pike County cases have not been released. Four confirmed cases had been reported in Pike County by Friday, March 20, including a part-time city employee.

In addition, a Troy. University student and a Troy University professor, both of whom live outside Pike County, have tested positive for the virus. Neither has been on campus since March 9, although the student was in Pike County March 16-17, officials said.