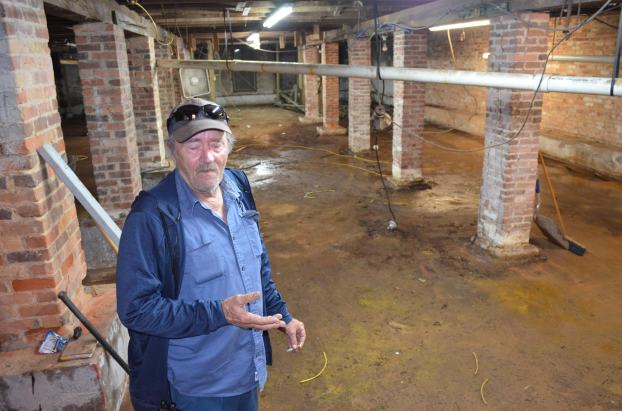 essenger photo/X The City of Brundidge received a USDA Rural Development matching grant which is dedicated to the renovation of the former Haisten Hardware building as a business incubator. The construction work is being done primarily by Construction Supervisor Steve Roberts and his crew. Roberts has been responsible for many of the city’s building projects including the Tupper Lightfoot Memorial Library addition and signage and the housing for the peanut.

Brundidge moving ahead during difficult days

Somewhere amid the downtown Brundidge Main Street traffic and the changing of gears on the big-rigs, there is the distant sound of iron striking iron.

Steve Roberts, construction supervisor for the City of Brundidge turns and looks as a visitor, perhaps, intruder, comes down the steps into the basement of the former Haisten Hardware building on North Main Street. The hardware was once a thriving business in a bustling small, Southeast Alabama town. Even earlier, the building was a grocery store and then a feed store, or perhaps, the other way around, No one remains who remembers for sure.

Years ago, the City of Brundidge purchased the building and, for a time, it housed a vibrant auction business. People came from near and far in search of antiques and old-tiques and even junk that was to be somebody else’s treasure. Then, the historic downtown building became quiet again, except for the occasional visitors who attended productions at the We Piddle Around Theater next door. They ventured in to use, as the theater emcee described, “the indoor facilities” or to wait out of the elements until the theater doors opened. Every now and then the building served as the voting center for one of the city’s districts.

But, now the beat goes on … thanks to a $100,000 matching grant from USDA Rural Development, with the city’s match at $10,000. The project competition date is June 2020. The grant will be used to fund a business incubator in the historic Haisten Building.

Roberts climbed the stairs to the main floor and talked as he walked.

“We’re working toward that completion date but there’s a lot more to do,” Roberts said.

“First, we’ve go to finish down in the basement and it’s a job. There was standing water that we had to contend with and then all these iron pipes have to be removed. But this is a fine old building and it’s going to be something  good for the city when we get done. We’ve just got to keep going and get it done.”

Roberts said, once the basement work is completed, the upstairs will move at a faster pace.

“The plan is to have six incubator businesses on the main floor. Three on one side and three on the other with a storage room. You’ve got to have a place for storage,” he said. “Those businesses will all be the same size but I want each one of them to have a different front, to make it look interesting in here.”

Roberts said the restrooms will be completely redone and there will also be a common area that could include an information desk.

“We won’t know what all we can do until we get started but this is going to be a really nice building,” he said. “The outside is going to look really good and it’s going to really improve the looks of our downtown area. And, the back of building is going to have a deck that connects to the existing deck. And we are going to extend the deck up through the alleyway and behind the theater. We’ll leave some of the antique hardware on the outside of building. Even the alley is going to be nice.”

Roberts said he enjoys working on projects that help revitalize the city of Brundidge.

“If we keep going, we’re going to have a real nice looking city but we can’t stop here,” he said.

Brundidge Mayor Isabell Boyd agreed that the renovation of the former Haisten Hardware Auction Building is going to be beneficial to the City of Brundidge, not only aesthetically but also as an incentive to future businesses.

The building will house a business incubator which the mayor said is a company that helps new and starting companies to develop by providing services including, but not limited to, management training or office space.

“A business incubator is something that we have talked about for a long time but didn’t get around to doing,” Boyd said. “But, thanks to the USDA Rural Developent Grant, it will soon be a reality. We are very appreciative of the grant and have high hopes that the business incubator will be successful in bringing entrepreneurs and other upstart businesses to our town.

“We are excited about the opportunity we have for entrepreneurs to being new and innovative ideas to Brundidge and others who are starting and developing traditional businesses. This is a new venture for us and, hopefully, what is started here, will help us grow our Main Street.”

Boyd said the City of Brundidge is open for business along Main Street and she views the available buildings, not as vacant, but filled with opportunities.

Alabama officials ordered residents to stay home except for essential trips, work and a few other things starting Saturday, with... read more