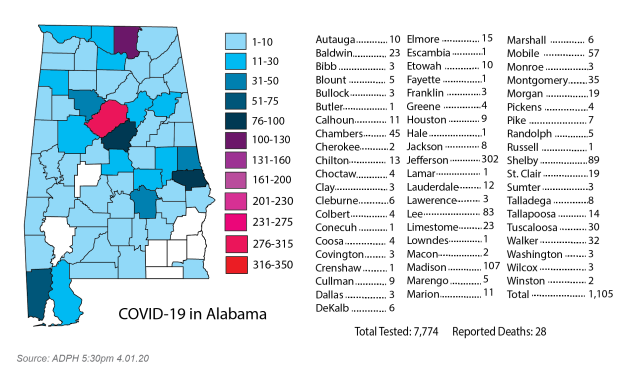 The Alabama Department of Public Health confirmed a seventh case of COVID-19 in Pike County.

The case was reported by ADPH around 6:45 p.m. on Wednesday, but no further details about the cases were available.

“I can confirm that ADPH has reported seven cases, but as of now I don’t have any details about those cases,” said Herbert Reeves, Pike County EMA. “We depend on information from the ADPH about the case, and we’re still waiting on that. I’m talking with our ADPH representative (Thursday morning) to get a better understanding of how the flow of information is working.”

Also on Thursday, the Pike County COVID-19 task force will meet via conference call, he said.

Four confirmed cases had been reported in Pike County by Friday, March 20, including a part-time city employee.

In addition, a Troy. University student and a Troy University professor, both of whom live outside Pike County, have tested positive for the virus. Neither has been on campus since March 9, although the student was in Pike County March 16-17, officials said.

Alabama on Wednesday reached 1,084 cases of the coronavirus, with 17 confirmed deaths from the virus.

The Alabama Department of Public Health said at 5:30 p.m. that 26 deaths have been reported in COVID-19 patients, and the state has so far confirmed that 17 of those were caused by the respiratory illness.

For most people, the new coronavirus causes mild or moderate symptoms, such as fever and cough that clear up in two to three weeks, and the overwhelming majority of people recover. But severe cases can need respirators to survive, and with infections spreading exponentially, hospitals across the country are either bracing for a coming wave of patients, or already struggling to keep up.

Traffic was backed up on Highway 231 at Paradise Home Sales, north of Troy almost to the Henderson Highway Wednesday... read more