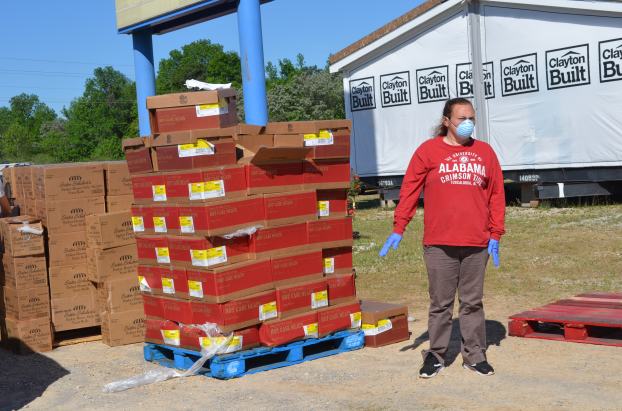 The owners of Paradise Home Sales gave away free meat and groceries to some 800 vehicles on Wednesday. The food was supplied by the Faith Rescue Crusade Montgomery Rescue Mission.

Traffic was backed up on Highway 231 at Paradise Home Sales, north of Troy almost to the Henderson Highway Wednesday morning. Fortunately, not because of an accident but due to a good deed.

Lucy Bailey, owner of Paradise Home Sales, said around 800 vehicles came through the food bank supplied by Faith Crusade Montgomery Rescue Mission between the hours of 9 a.m. and noon.

“The response was overwhelming; we actually had to turn people away,” Bailey said. “We just gave out of food. But, thanks to Chaplain Curtis Browder and has food bank, a lot of people were helped during these very trying times.”

Bailey said she and Browder are friends and he called her and asked if Paradise Home Sales would be a distribution site for the food bank.

“Chaplain Browder’s food bank works off donations,” Bailey said. “Companies donate food to his missions and he makes it available to people in need.”

Bailey said Browder goes where there is a need.

“When there were hurricanes in Florida, he was there,” she said. “He was recently as close as Brundidge and, today, he was in Troy.

The food bank at Paradise Home Sales was to have boxes of meat to distribute but it was meat and more, Bailey said.

“There was everything from meats to flowers,” she said. “There were 14 pallets of meats including chicken, turkeys and hams, just any kind of meat you could think off.  And, there were sacks of potatoes and green onions and beans and salads, pizzas, crackers and Sister Schubert rolls.”

Bailey said the Browder’s Faith Crusade Montgomery Rescue Mission a blessing to so many.

Almost surprisingly, she said, there was a large number of older adults who benefitted from the food bank.

“I had expected most of those who came to be younger adults but I was pleased with the number of older people who came through and thankful for them,” Bailey said. “This was a good deed on Chaplain Browder’s part and we had about 25 volunteers who gave of their time. I was grateful to be a part of it.”

The oak trees on the downtown square in Troy are enjoyed by many but, probably, few have given thought to... read more