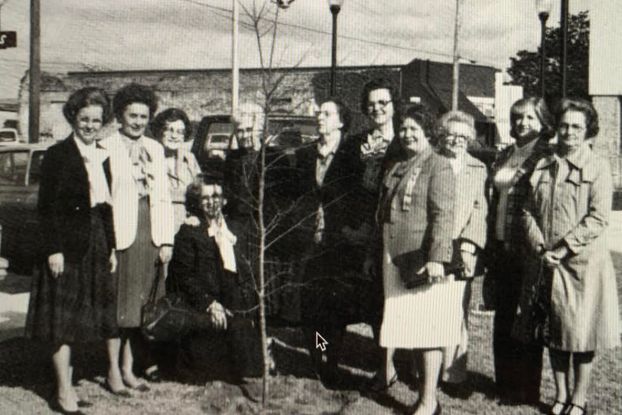 The oak trees on the downtown square in Troy are enjoyed by many but, probably, few have given thought to the origin of the trees.

When researching trees that were planted by the Daughters of the American Colonists, Penny Genise of Washington found Duncan Lindsay of Troy by Googling “Deer Stand Hill” and visiting his “Deer Stand” blog.

“She contacted me to ask if I would take a photo of the tree that was planted in 1982,” Lindsay said. “She couldn’t tell me where the tree was planted but, when I saw the photo, I immediately knew it was an oak tree on the square. And, I knew which tree by the angle the photograph was taken.”

Genise said her interest in the tree stemmed from a project she is doing as national chair of Historic Landmarks & Memorials for the National Society Daughters of the American Colonists. Genise said.

“Our organization was established in 1921 and what I am doing as part of our bicentennial celebration next year is researching the historic markings and trees planted by the chapters and state societies of NSDAC since 1921.”

Genise said she is delighted to learn that the oak tree planted in the historic Deer Stand Hill square January 16, 1982 is thriving.

“Deer Stand Hill in the historic downtown square in Troy was clearly a perfect place to plant an oak tree, which is doing so well 38 years later,” she said. “I’ve updated our records to including a wonderful photo I received from Duncan Lindsey next to the photo I had at the time of the dedication.”

Genise didn’t know if the ladies who planted the tree were members of a chapter or a state project but she was interested in knowing the name of the chapter and about the dedication.

One of the ladies identified was Mary Alyce Sanders of Goshen.

“The ladies in the photograph were members of the Captain Thomas Carter, Sr. Chapter, Daughters of the American Colonists,” Sanders said. “We celebrated our first anniversary by planting an oak tree, our symbol, on the historical downtown shopping square on January 16, 1982.

“Our chapter was organized by Mrs. B.M. Flowers who was a direct descendent of Captain Thomas Carter, Sr. and confirmed January 28, 1981,” Sanders said. “We were the first chapter in Alabama to be installed at a State Assembly and by a national officer.”

To be a member of the Daughters of the American Colonists, one must be of good moral character and of lineal descent from those men and women who were actual residents of America when it was under foreign government as colonies and who served prior to July 4, 1776, in a specified capacity prior to July 4, 1776.

Sanders qualified to be a member of the Daughters of the American Colonists on the side of her father, Melton Carter, Sr.

“The research had already been done for my dad’s family,” Sander said. “I was way down, nine generations. I consider it an honor to be a member of the Daughters of the American Colonists. I’m not sure how many members there are but I don’t think it would be a lot.”

At Troy Health and Rehabilitation Center, the residents are adjusting to the changes that have been made to keep them... read more