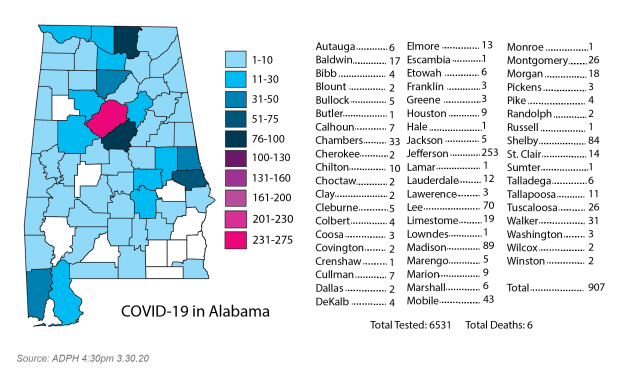 As confirmed cases of COVID-19 continue to climb throughout the state, Pike County officials are urging residents to stay home and follow social distancing guidelines and orders.

“I do think the vast majority of folks have been very cooperative with the (state) health orders and done their part to adhere to the order,” said Herb Reeves, Pike County EMA director. “We would simply continue to ask people to adhere to those orders.”

Total COVID-19 infections in Alabama stood at 921 on Monday, the state Department of Public Health reported, including four confirmed cases in Pike County.

The official death count for Alabama stood at six, but the tally did not include most of the six deaths reported last weekend by the East Alabama Medical Center, a hospital in Opelika.

The hospital said Sunday that only one of the deaths was included in the state total and the rest were being submitted to an official state process. The Department of Public Health said in a statement that a department physician reviews the records of COVID-19 patients to determine whether a death should be attributed to the virus.

Reeves said according to the ADPH no confirmed cases of COVID-19 related deaths had been recorded in Pike County through Monday.

State abortion clinics went to court Monday seeking a temporary restraining order to prevent Alabama from shutting them down as a “nonessential” medical service. The clinics said without court action, they will be forced to cancel more than 20 abortions scheduled for Tuesday. Those included one patient who will be pushed past the legal limit for abortion in the state if she does not receive the procedure this week.

“Preventing them from getting an abortion doesn’t do anything to stop the COVID-19 virus, it just takes the decision whether to have a child out of their hands,” said Randall Marshall, executive director of the American Civil Liberties Union of Alabama, in a statement.

Alabama became the latest state in the nation to close many nonessential businesses with a state health order that took effect Saturday. The directive orders a postponement of medical procedures unless needed to treat a medical emergency or “to avoid serious harm from an underlying condition or disease, or necessary as part of a patient’s ongoing and active treatment.”

The ACLU’s Marshall wrote they were unable to get an answer from the state on how abortions would be viewed, “putting clinics in the crosshairs of being second guessed and prosecuted for their medical judgment.”

Alabama Attorney General Steve Marshall said Monday that the state would not offer a “blanket exemption” to clinics.

“Put simply, no provider or clinic is excused from compliance with this order,” Steve Marshall said.

“In Texas and Ohio, as in Alabama, abortion providers are demanding special treatment and believe that they are above the law when it comes to the emergency orders,” the attorney general said.

A spokeswoman for Alabama Gov. Kay Ivey did not immediately return a text message seeking comment.

Ivey on Monday repeated the call for people to stay home.

“These are uncertain times for sure. So now, and for the foreseeable future, please, please consider staying safe at home,” Ivey said in a video message released by her office.

Stacy Graning and the Associated Press contributed to this report.

A fourth confirmed case of COVID-19 virus was reported in Pike County on Friday. Herb Reeves, director of the Pike... read more