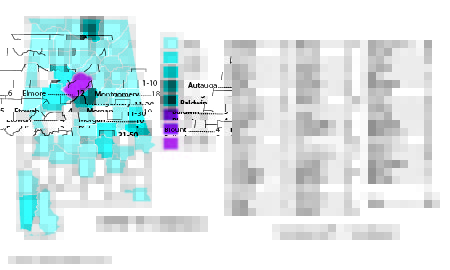 With four cases of COVID-19 confirmed in Pike County during the past three days, local medical experts are warning that more are likely to come.

“I think the important thing to understand about all this is that what we see today is not the full picture,” said Dr. Eric Law. “We won’t know what’s really going on today for another seven to 12 days.”

As of Friday afternoon, more than 600 cases of the COVID-19 coronavirus were reported by the Alabama Department of Public Health, with three deaths attributed to the virus.

And although a fraction of those were in Pike County, medical experts expect that number to increase due to both testing and community spread of the virus, which has an incubation period of up to 14 days.

“’The couple of cases we have confirmed are almost certainly not the full extent of what we have going on right now,” Law said. “In Troy there are easily a couple of dozen tests outstanding that we’re waiting on … any of which have the suspicion that they could be COVID-19.”

The threat, Law explained, is the ease with which the virus spreads and the relative good health of many individuals who could already be infected and spreading the virus.

“I am concerned,” he said. “It’s a grave enough threat that It is difficult to stress how cautious every needs to be.”

In an effort to contain the spread, officials have made attempts to curtail interactions: all public schools in Alabama have cancelled on-campus classes for the remainder of the school year; the governor on Friday expanded orders to close many non-essential businesses to the public, including bars and restaurants (carry-out service only); retail shops; sporting goods stores; and churches have cancelled worship services and Masses.

Even so, Law said many people may not understand the severity of the threat.

“I know there are some people who are not taking heed of that,” he said. “There are some who are feeling fine and not adapting their day-to-day lives appropriately. But based on the data we have from all over the world, the person carrying this virus is not the person who has a cold or looks sick. It’s the people walking around who looks just fine.”

Dr. Ben Smith agreed, saying now is not the time for people to become complacent, despite warm weather; sunny days; and the strains of foregoing social gatherings.

“Don’t let your guard down,” he said. “We haven’t even touched the spread that will come.”

While state and local officials have stopped short of issues shelter-in-place orders or restricting public access, medical professionals err on the side of avoiding as much public interaction as possible.

“I would encourage people to take the next few weeks to be very aggressive in distancing themselves from others,” Law said. “Stay home, work at home if you can, and allow this thing to go ahead and reach its peak …

“Limit your grocery store trips to a bare minimum, and make a list before you go so you can make good use of the trip.”

Don’t gather for playdates and social visits, if you can avoid them.  Even doctor’s appointments are being rescheduled to avoid exposure.

“But if we’re aggressive now, we could limit how long this thing goes on.”

Charles Henderson and Goshen react to news of canceled season

State Superintendent Dr. Eric Mackey took to the podium on Thursday afternoon to announce the unfortunate news that all spring... read more