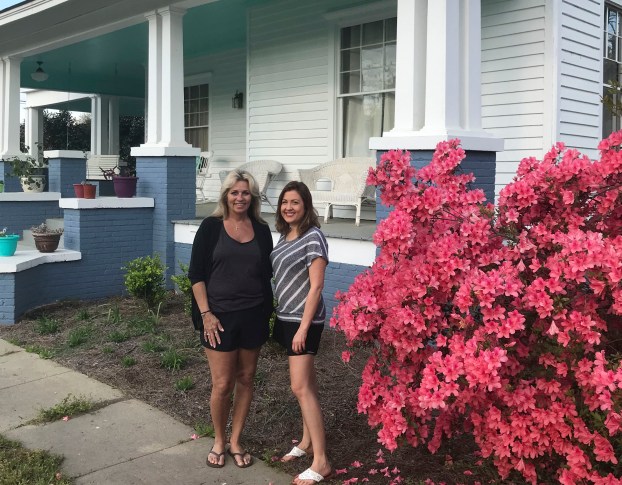 Tina Barbour, right, came to the House of Hope in Brundidge not really knowing what to expect. But, in short time, she found a welcoming community and a “a greenhouse where God could do His work without distraction.” Pictured with Barbour, is Alicia Carroll, House of Hope director. The annual House of Hope fundraiser has been postponed until September. Until then, donations are greatly appreciated. Call 205-440-9712 for more information.

HOPE: Home offers hope and a promise for a new beginning

When Tina Barbour arrived at the House of Hope in the early fall of 2019, she thought she was being cast as an extra in a Hallmark movie.“Brundidge is such a quaint little town and the people are so genuine, I do feel like I’m back in time,” Barbour said. “Brundidge feels like home now. I’m very comfortable here. This is where I needed to be to become who I am in Christ.”

However, her belief is that God had a hand in bringing her to the House of Hope and providing her with the opportunities to be a resident there and a part of the community.

“The House of Hope was the logical place for me,” she said. “For me, it was a calling and I had peace about it.”

Barbour is originally from California where she was a dental hygienist for 16 years.  Her parents later moved to the Tallahassee, Florida area and Barbour has also spent time there.

“My parents are close so they can visit me often. It’s comforting to have family nearby. I’m fortunate to have a job here in Brundidge and to have been a member of the cast in the community theater here. I feel at home in a Hallmark town.”

But even in Hallmark towns, there are challenges, including working on the line at a food manufacturing company.

“It’s not an easy job; actually, it’s tough,” she said. “It’s challenging and I need to be challenged. But, I don’t feel stressed, just tested and I’m passing the test.”

Barbour said her ability to find peace and contentment at the House of Hope has made it possible for her to seek the plan that God has orchestrated for her life.

“Being here at the House of Hope is like being in a greenhouse where God can do His work without distraction,” she said. “This is not an end all place. For me, this is the jumping off place. I know that God has more in life for me. There is going to be more to come.”

Just what that “more” will be, Barbour is not sure.

She admits that she misses the big cities and the California beaches.

“And I miss the highways,” Barbour said and added with a smile, “here, there are too many trees.”

Barbour said she would be happy in a bungalow on the beach. She plays the piano and would like to play with a band, maybe Indy or folk music. But most of all, she wants to be a contributing part of the community were God places her. She wants to fulfill God’s plan for her which she thinks is, not as an extra, but, with a supporting role, maybe even in a Hallmark town.

‘I’m concerned … but life goes on’

Frank and Wynnette Fryer laughingly said they would not normally be grocery shopping in the “wee” hours but then, there... read more