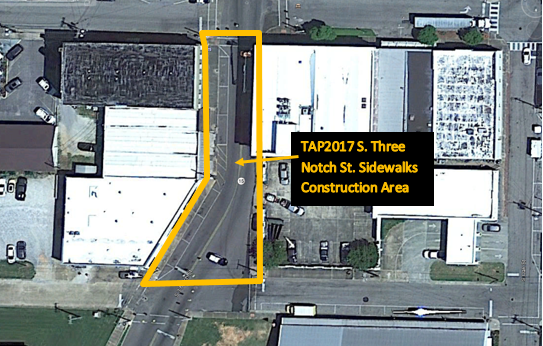 Messenger photo/submitted Sidewalk improvement work is underway in the City of Troy. Traffic flow and parking will be impacted in for the next four to five weeks, officials said.

The second phase of a downtown sidewalk improvement project is underway in Downtown Troy and will affect some parking for up to five weeks.

“The City of Troy would like to inform the public that the construction on the TAP 2017 Downtown Sidewalks Phase II project along South Three Notch Street between Church Street and Love Street has started,” said Melissa Sanders, Planning and Zoning Administrator.

The work will create some adjustments for traffic flow.

This portion of TAP 2017 Downtown Sidewalks Phase II project along South Three Notch Street is anticipated to last 4 to 5 weeks.

“Motorists are asked to use caution and mind traffic signs and construction workers in this area during this construction project,” Sanders said. “The contractor plans to keep pedestrian access to the adjacent businesses open. Please continue to watch for pedestrians and slow-moving vehicles. We thank you for your patience during this project as we work hard to improve your city.”

Plein Air: Event offers a bit of cheer to artists

“Plein Air on the Square” in downtown Troy Saturday attracted “distant” curiosity seekers who just had to see what was... read more