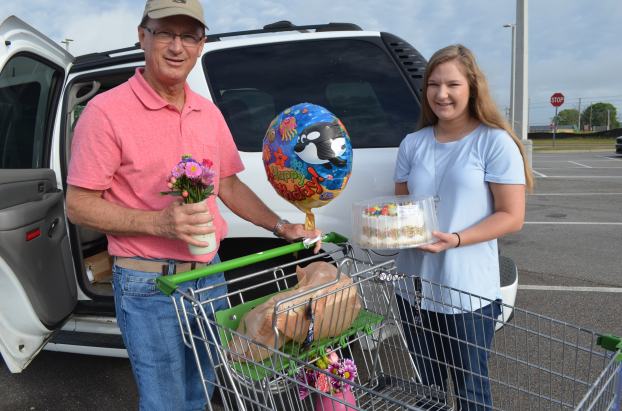 Tommy Lowery and his daughter, Iviana, are doing all they can to maintain a level of normalcy as the family copes with canceled classes and the unknown of the coronavirus situation. On Tuesday, they purchased supplies for a small, family birthday celebration.

‘I’m concerned … but life goes on’

Frank and Wynnette Fryer laughingly said they would not normally be grocery shopping in the “wee” hours but then, there is little normality in the world today.

The Fryers joined scores of local senior adults for an early-shopping hour at the Troy Publix on Tuesday.

The Fryers of Naperville, Illinois, are Brundidge natives and, normally, spend January through March here “at home” but, because of the coronavirus spread in Illinois, they will winter in Alabama a little longer.

“We have children and grandchildren in Illinois and there are more cases of the virus in the Chicago area than here in Alabama,” Frank said. “So, our children have told us to stay here as long as necessary.”

Wynnette said their plans are to stay through April. Then, they will make a decision as to whether they will go home or stay home.

Lynda Borden of Pine Level came to shop for 30 days so she was pushing two loaded shopping carts. Borden and her husband normally live a rather isolated life in the Pine Level countryside.  However, her daughter and her two granddaughters came up from New Orleans to weather the storm, so to speak.

“My daughter is living isolated in the guest house for 14 days, as a precaution, so we only visit from a distance of six feet,” Borden said, but added with a smile, “it’s hard to isolate children.”

So, Borden is homeschooling the grandchildren but they understand the need for social distancing, so there’s no hugging or kissing. “There will be times for that later.”

For Borden, having her daughter and granddaughters nearby is comforting, but life isn’t all that different for her and her husband.

“We are not town people,” she said. “That’s why we live in the country. So, social gathering is not a concern for us. But I do appreciate the opportunity to shop during the early hours and with other seniors.”

Penelope Dawson is also very appreciative of the opportunity for early shopping for seniors. “It gives me increased confidence to shop for groceries,” she said.

Dawson said, not knowing what lies ahead, she is more behavior conscious.

“So, I’m finding more to do at home,” she said. “My major project is to complete a year-long needlepoint project. And, I’m taking advantage of streaming services … PBS PassPort. It’s all wonderful stuff. Try it!”

Jim Medley of Brundidge waited in the car while his wife did the grocery shopping. His thoughts were more on the effects of the coronavirus than the grocery list.

Medley said the government was late reacting to the global pandemic and that has put Americans behind the eight-ball.

“Now, it’s up to us to stay ahead of the curve,” he said.  “As Americans, we are resilient and we will come out of this.”

Judge Bill Barr agreed and said that the older generation has proven that Americans will stand together when times are tough.

The most senior of senior adults have lived through WWII and Korea and others through Vietnam and they will lead the way through this crisis, he said.

Tommy Lowery and his daughter, Iviana, were early shopping but not for meat and potatoes.

They were shopping for a birthday cake and flowers for mom’s birthday. Life goes on.

Life does go on and we must make the best of every day, said James Kimbrough.

“Of course, I’m concerned,” he said. “I have 14 great-grandchildren. I worry about what life will be for them but we have to keep on living, so I pray. Prayer heals all things.”

‘If you’re healthy, why not give?’ Troy University and the Red Cross host blood drive