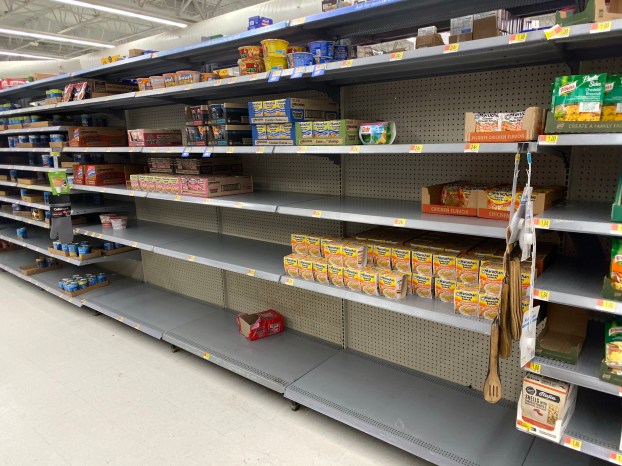 Can business be too good?

That’s a question grocers and other retailers are asking as public fears over the spread of the COVID-19 coronavirus have cleared shelves of everything from toilet paper to canned goods.

“It’s been crazy since about 10 a.m. on Friday,” said Steve Garrett, who owns the Piggly Wiggly stores on Three Notch and U.S. 231 in Troy.

“It’s starting to affect things we’re not used to running out of.”

“I think between my two stores and my brother’s store in Brundidge, we’ve probably sold a truckload of toilet paper in the past couple of days,” Garrett said.

Reports across the nation show the same thing: empty shelves where bottle watered, toilet paper, and food once stood. The rush to stock up – in some cases, perhaps, hoard goods – was sparked by fears of quarantines throughout the country as national, state and local officials implement efforts to contain the spread of the coronavirus.

And while Garrett had been at work since 2:30 a.m. on Monday, he was still in good spirits as he talked about the need to reassure the community that food and supplies will be available in upcoming weeks.

“It’s like this,” he explained. “The stores are selling two to three times more of everything than they normally do, so the warehouses (that supply us) are doing the same thing. Our stores and our warehouses work on an inventory with a limited number of days in supply, to keep everything from getting old.”

The suppliers, distribution warehouses and retail locations must adjust to the rapid influx of demand.

Garrett compared the local demand to the rush in grocery purchasing often seen when a hurricane watch or warning is issued for an area. “It’s like twice what a hurricane day would be,” he said. “And now, it’s every store wanting things, not just the stores in South Alabama who are worried about a storm coming towards them.”

So Garrett is placing extra orders – “I’ve ordered 300 cases of toilet paper, but I’ll have to wait and see how many I actually get.” – and he’s working to reassure customers that empty shelves are a temporary inconvenience.

“We’re just asking everyone to be patient,” he said. ‘The product is still coming to our stores. We’re all working as hard … and we are doing our best to get back to as normal as we can get.”

Troy University officials made the decision Monday to cancel all March study abroad trips due to the new coronavirus, and... read more