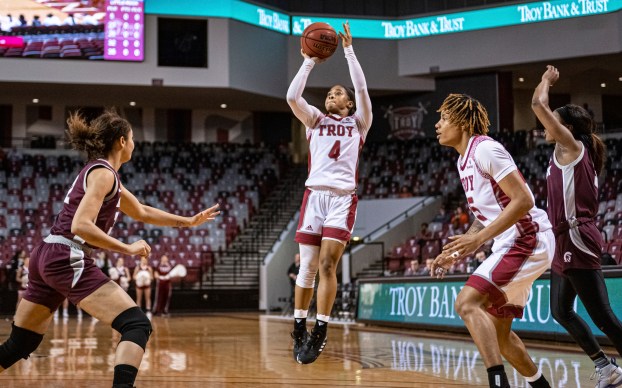 Photo/troy athletics Jasmine Robinson goes up for a shot for the Troy Trojans against Little Rock earlier this season.

JONESBORO, Ark. – The Troy women’s basketball team did something never before done in program history, win an outright regular season championship. The Trojans defeated Arkansas State 91-81 on the road to not only clinch the outright championship, but also secure the No. 1 seed in next weekend’s Sun Belt Tournament in New Orleans.
It came down to the final day of competition, but the wait was well worth it. Troy entered Saturday in a tie for first-place with Coastal Carolina, and slotted into the No. 2 seed based on tiebreakers. Needing to win to earn a share of the regular season Sun Belt title, Troy got some help from App State who upset Coastal Carolina on the road in double overtime to open the door for Troy to win the title outright and earn the top seed.

Troy started slow in Jonesboro, falling into a 10-0 hole right out of the gate. With the jitters behind them the Trojans quickly flipped the script, scoring seven straight points, including six from Amber Rivers who drilled a pair of corner triples, before eventually getting it to just a one-point game after the first. The deficit was created in part to Troy shooting just 30 percent and Arkansas State shooting 42 percent in the first half. After the first half trailed 41-42.

In the second half Troy found its rhythm and completely flipped its shooting percent from 30 percent to 43 percent for the half, including an impressive 58 percent in the final quarter. Troy’s second-half was sparked by its senior leaders who scored 31 of its 49 points. Japonica James was the driving force in the comeback, scoring all 14 of her points in the second-half including 10 in the fourth quarter. Kayla Robinson wouldn’t allow her team to go down without a fight, scoring all seven of her second-half points in the fourth-quarter, she ended with 11. Harriet Winchester added five including the biggest three of the game with 52 second left in the third to make it 61-62. Kate Rodgers added six points and did what she has done all season, locked down the post and drew charges a key moments of the game. Jasmine Robinson led all scorers in the contest with 16, the most points she has scored since dropping 14 against App State on Feb. 15. Alexus Dye recorded her ninth double-double of the season with 14-points and 13 rebounds while Tiyah Johnson added 11-points, her most points scored since scoring 10 at Texas State back on Jan. 23. Tyasia Moore and Janiah Sandifer each added two points as Troy scored 91 points in its victory over Arkansas State.

Quoting Coach Rigby
On the winning the regular season championship
“Everybody tonight did such a great job. Our players wanted to bring a championship to Troy so bad. We’ve talked about it, dreamt about it and prayed for it every single day and it’s so great to see goals like this come to fruition.”

On this team being able to stay focused on the task at hand with three straight road games
“I appreciate all the people that have followed up and listened to us and watched us to get a feel at how difficult it was to win these three games on the road, especially getting all these teams on their senior nights. I am just so proud of the team and I am so proud of my assistant coaches. I’m thankful for our administration and I am thankful for our fans.”

Covenant Christian School was a-buzz Friday as storybook characters stepped from the pages of their books and told stories of... read more