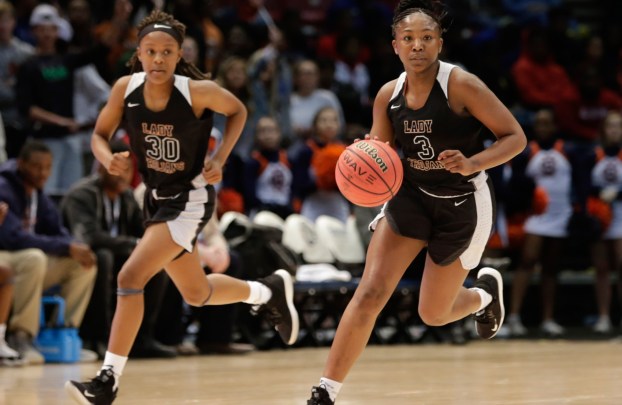 Welcome back: Trojans run away from Center Point in Class 5A semifinals

BIRMINGHAM – The Lady Trojans of Charles Henderson High used the same approach in the first round of the AHSAA Final Four as they have all season, providing a stifling defense and fast-paced offense, en route to a blistering 68-28, 40-point win over Center Point Wednesday afternoon in the BJCC Legacy Arena.

Improving to 28-0 on the season, the Lady Trojans will meet Madison Academy, 31-4, a 65-40 winner over Shelby County for a Saturday morning, 9 a.m. state championship final.

After being held to only one point in the first half, senior guard Niaira Jones led all scorers with 25 points and 10 rebounds for CHHS, while freshman guard Makayla Hobdy hit four-of-six 3-pointers for 20 points. Jones also was four-of-six beyond the arc.

In addition to the 25 by Jones and 20 by Hobdy, CHHS also got scoring from Mykyia Milton with eight points, Kristian Jackson with six points and seven steals, Samira Moore with five points and seven blocked shots, and Deanna Gosha with four points. Jones has scored 2,351 points to date in her career at CHHS.

The Lady Trojans defense was also relentless, forcing 26 turnovers in the contest.

CHHS Head Coach Dyneshia Jones said it was bittersweet for her to lead her girls to the win, as Center Point Head Coach Tamara Gills is a close friend, but it was all about taking care of business.

“She has a great team, but I am proud of my girls,” said Coach Jones. “We knew coming in they were very aggressive and what they had, and we prevailed at the end. Especially in the second half, being up by 13 at halftime, and pushing on down in the third quarter.

“My philosophy is defense wins the games. With defense we can get the easy layups. And momentum wise, that’s what our girls love. The great thing about this team, they never ask me about points or how many steals or charges. Defense is very important and we go over that every day in practice.”

Center Point, ending the year at 23-6, applied heavy defensive pressure to Niaira “Tootie” Jones in the first half, holding her to one point, but the Lady Eagles tried a different defensive strategy coming out at halftime, a decision they are likely regretting right about now.

“We knew they were going to try a box-and-one on Tootie, so we went over a couple of plays for that,” said Coach Jones. “I told them we were going to have to make them get out of that, and that we were going to need a couple of other girls to start hitting shots. You just can’t go with one person on our team. It worked. We hit shots and Tootie did not score anything, so it forced them out of it.”

Coach Jones also had some tough love advice for her daughter Niaira at halftime.

“I told her she was going to sleep outside in the shed if she did not score any points, so she stepped it up.”

Niaira said she knew she had to make a difference in the second half.

“I just wanted some way to help my team out,” said Jones. “In the second half they were leaving me open, and they kept feeding me the ball so I kept shooting.”

Coach Jones also said the freshman Makayla Hobdy has been working on three-pointers in practice all year, and it paid off Wednesday.

“She’s the one that is always making the fake bets, ‘Let’s bet five dollars on this three-pointer,’” said Coach Jones. “All-day, every day, she practices the three-pointers a lot. We have a lot of girls that can score, but this ninth-grader, she hit a lot of three’s today.”

Center Point was led in scoring by Tanita Swift and Aniya Brooks with 10 points each.

CHHS will take on Madison Academy Saturday morning for the Class 5A State Championship, 9 a.m., in the BJCC Legacy Arena, in hopes of winning their second state championship since 2018.

As Charles Henderson Child Health Care Center embarks on its fifth decade of service to the community, a new national... read more