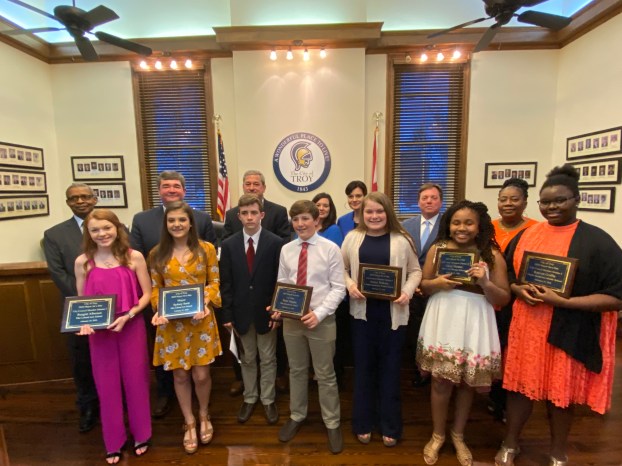 Seven seventh-grade students from Troy schools served as the mayor, council and clerk for Troy on Tuesday for the day thanks to the Mayor for a Day program.

Pike Liberal Arts student Sydney Scott was named mayor for a day based on her essay urging Troy to have a “celebrate service” campaign, which served as the basis  of the resolution passed by the temporary council.

“I wanted to help our elderly citizens with  yard or house work or help to keep the city clean,” Scott said.

The bill pulls in what other students on the council wrote in their essays, such as helping the homeless.

“I noticed that we don’t have a homeless shelter in Troy and nowhere for veterans,” said Chloe Thomas, council president from New Life Christian Academy.

Thomas also wrote about creating fun places for families in Troy to go.

Council member Raeven Griffin also wrote about creating a homeless shelter, as well as public transportation for residents that need to go to work late or run errands at times not currently offered. She also wrote about the need for labor and delivery and a trauma center in Troy.

Council member Jackson McLendon of CHMS chose a temporary sales tax as his pitch, saying he would temporarily raise taxes to build a new marketplace and bring in new business such as Target.

Council member Ansley Watkins of CHMS wrote about adding more activities such as bowling and more restaurants for families and to increase tax income.

Council member Reagan Alberson of PLAS wrote about adding a new residential area in Troy for widows and elderly people that is quiet and manageable as well as constructing a turning lane on John H. Witherington Drive and adding a light beside SheBang.

Clerk Pruitt Vaughan of PLAS said he would like to fix up the Fraknlin Sports Complex baseball fields for children in that area.

The temporary officials took a tour of the city on Tuesday, from City Hall to the Troy Public Library and a tour of the downtown area.

Many of the students pointed to the tour as their favorite part of the day as they got to learn about the history of the city that they did not know about, while the library tour and games were a highlight for others.

During the regular council meeting, the council:

• Approved a grant application for the Environmental Services Department for a total of $139,000 from the Alabama Department of Environmental Management. The grant would fund new recycling trailers, self-dumping hoppers and a paper shredder.

• Approved an amendment of Ordinance 415 Article 5 to remain in compliance with state and FEMA flood prevention standards.

Troy University has lost a legend. Dr. Johnny M. Long passed away at his home on Monday evening at age... read more