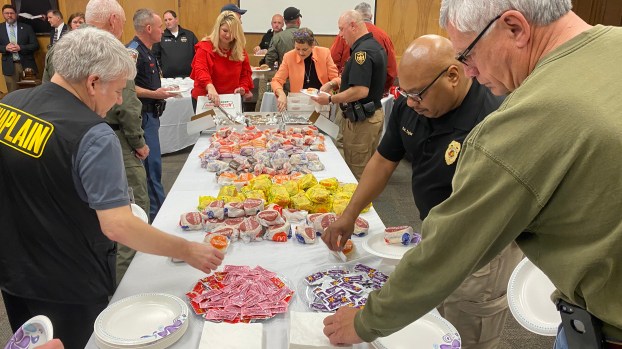 “Enough is enough.  We’ve got to do something; something’s got to change.”

The law enforcement officers were gathered for an appreciation breakfast, with police and deputies from surrounding counties participating.

Sheriff Russell Thomas said he called the appreciation breakfast partly in response to the latest “blue alert” that came through in the night notifying that a Kimberly officer had been fatally shot.

“When you get that, you lay there and you can’t go back to sleep,” Thomas said.

Mayor Jason Reeves said it was good to have the police together on a joyous occasion, instead of on the scene of a tragedy where they meet too often.

“We’re family and we’ve got to work together,” Reeves said.

“I remind you today how much we appreciate you for what you do.”

The annual Pike County Heart Walk and related activities will be from 5 until 7 p.m. Thursday at the Troy... read more