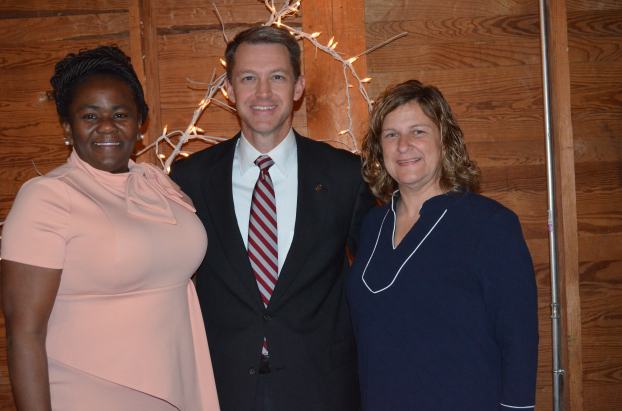 The Brundidge Business Association honored its own Thursday night at the association’s annual membership banquet at Collier’s Event Center.

A highlight of the banquet was the recognition of Brundidge Piggly Wiggly as the BBA’s Business of the Year and congratulations to its owners Stanley and Jennifer Garrett.  The Garretts have owned and operated “the Pig” since 2003. However, the Garrett family has been a mainstay in the Brundidge grocery business since 1985 when Stanley’s parents, Johnny and Patricia Garrett, invested in the grocery business.

The BBA also recognized the Teachers of the Year in Brundidge, Tammy Goss at Pike County High School and Lytelia Berry at Pike County Elementary School.

Hannah Clifford, PCHS assistant principal, said Goss has been in education for 22 years, 10 of those years at PCHS. Goss teaches middle school science and is a mentor to her students.

“Tammy Goss has a servant’s heart,” Clifford said. “She is always there for our students. She is not just a teacher; she is a friend.”

Goss expressed appreciation for the recognition for what she said is her “true calling.”

“Teaching is God’s will for me,” she said. “He instilled in me a love for kids. Teaching is what I do. Teaching blesses my heart.”

Tracy Arnold, PCES principal, said Lytelia Berry has taught at other schools but, knowing the kind of teacher Berry is and the kind of person she is, she encouraged her to come to PCES.

“Lytelia is an excellent teacher and she is dedicated to her students,” Arnold said.

Not long after Berry joined the PCES faculty, her National Guard unit was deployed to Iraq.

Allen said he is enjoying his new role in the political arena and brought good news about the state of the state.

“The budget looks good; both the Educational Trust Fund and the General Fund,” he said. “The economy is on fire and we are looking forward to a big year. The huge task before the Legislature is to set priorities.”

Allen said the state’s prison system continues to be of major concern.

“We have 22,000 people in Alabama prisons and 2,000 on death row,” he said.  “The federal government will get involved if we don’t get issues with the prisons worked out.”

Allen cited getting broadband Internet in rural areas and workforce development as important issues before the Legislature.

Mental health affects families, hospitals and law enforcement, so it is also a high priority for the Legislature, Allen said.

“I am looking forward to helping solve problems for the people of Alabama,” he said.

“We, in the Legislature, are not always going to agree on everything but we can agree on many things. It’s going to take working together.”

Brundidge Mayor Isabell Boyd said the City of Brundidge is moving forward with projects that were begun in 2019 and has new projects on the drawing board.

“We are working with a $10 million budget and that’s very good for a town our size,” the mayor said. “Our sidewalk project is moving ahead and we have a grant to demolish abandoned and dilapidated building across town.”

Boyd said the city council has taken the city’s recreation program back over and it is doing extremely well.

“We recently deeded 28 acres of city property to the Pike County Board of Education and they plan to develop it as an athletic park. We are looking forward to a good year and we appreciate our Brundidge Business Association and the work they do to help Brundidge move forward.”

Gracey said business ownership is not a requirement for BBA membership. Those who have an interest in the future of the city and want to be involved will be welcomed into membership.

Troy Fire Capt. Chris Lowery was honored Friday at The Studio as he retired after 23 years of service with... read more