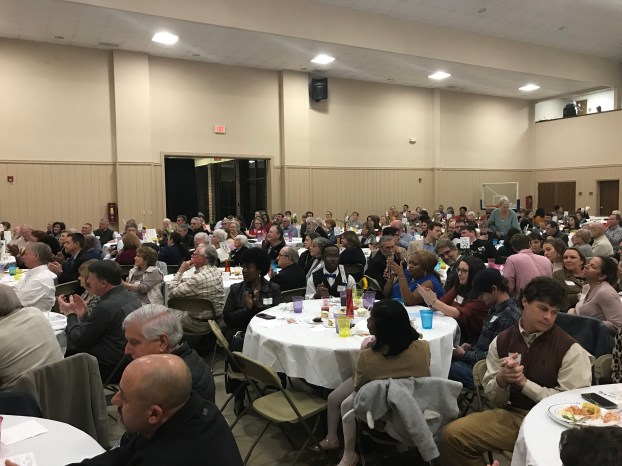 “We all love heroes,” Bob Foust told more than 300 people packed into the Park Memorial UMC gymnasium on Friday night for the annual Sav-a-Life Fundraising banquet. “But what is a hero? I recall an interview with Joseph Byard who was cleaning up and looking for survivors after the attack on  September 11, who came across the body of his brother, a firefighter. When he was asked later what a hero was, he said that a hero is an ordinary person doing the ordinary right thing in extraordinary times.”

Foust challenged the 300 people in attendance that they are all people with the potential to be heroes. He painted the picture of their support of Sav-a-Life against the Biblical story of David and Goliath

“All the ordinary people there were saying Goliath is too big, he can’t be defeated,” Foust said. “Then David comes on the scene. And he says that Goliath isn’t just challenging them, he’s blaspheming God. Heroes have a way of getting to the bottom line. They shuck away all the superlatives.

“I see 300 Davids out here. You have a wonderful opportunity to be an integral part of this. You can be like the brothers who don’t know what to do, or you can pick up five stones and start throwing.”

The pregnancy resource center saw 400 people in 2019, with 380 of them sitting and hearing the Gospel while being assisted with their pregnancies. Sav-a-Life reported 7 percent prayed to receive Christ as savior. The center also performed 100 ultrasounds.

“The retail rate for an ultrasound scan is $300,” Foust said. “That’s the value of what you’ve done by supporting Sav-a-Life.”

The center has also provided follow-up parenting classes for 350 people and have given away many necessary supplies including brand new car seats to people who complete the programs. The center has also recently started ministering to men.

Executive Director Jane Ward said she envisions STI treatment as the next step fro the center.

“We want to expand our ministry to testing women who may or may not be infected with STDs,” Ward said. “That’s also very expensive. We want to share that vision with you so we can actually make it a reality. There are so many needs in our community; I know we’re small, but I would like to believe we can play a big part.”

Kimmy Caesar testified to the help that Sav-a-Life gave her as a student at Troy University in 2014.

“During the snow day of 2014 I met a very nice boy and we clicked,” Caesar said. “Shortly after, I found out I was pregnant. At first, everything was fine, but summer came and like most college students, we both went home. We started fighting and he dumped me. But life went on and I returned to college only to find college students were not so accepting. I walked into Sav-a-Life at 22 weeks pregnant. (Board Director Gwen Martin) gave me something I so desperately needed: someone to listen. She made me realize all I needed was Jesus. Later that boy turned into a man, and at 36 weeks pregnant, he married me.”

Caesar also testified that she returned to Sav-a-Life shortly after as a volunteer to make a difference in the lives of other young women, all while pregnant with her second child as an example that pregnancy is “not the end of their journey, just a moment in time.”

Board member Todd Kreis also urged men to get involved by supporting Sav-a-Life financially and spiritually.

“This is not some far-off company you’re giving money to; this is an organization making a difference right here in this community,” Kreis said.

Kreis said the center is starting a new campaign to take $10 monthly donations to help support the services provided.

Foust encouraged the supporters that they are supporting a winning cause.

“When I started, there were seven abortion providers in Birmingham alone and the state was aborting 26,000 babies each year,” Foust said. “As of 2016, less than 6,000 abortions are being performed per year. We’re winning.  We’re seeing lives changed, hearts changed. You’re making abortion unnecessary and undesirable in your city.”