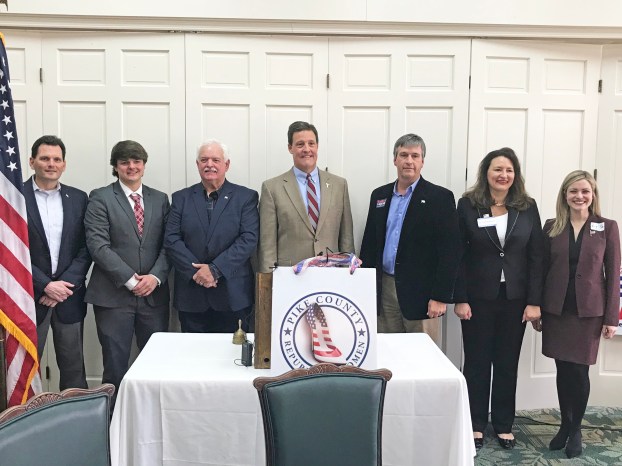 Hasdorff said she is running to combat socialism and to protect the district’s conservative values.

“In high school, I was one of 40 students selected for an exchange program to Russia and I went and saw what communism looked like,” Hasdorff said. “When we landed back at JFK (airport), I got down on my hands and knees and kissed the ground. It’s horrifying to me to see the rise of socialism in my own country.”

Hasdorff also shared her experience in Washington, D.C., working for House leader Newt Gingrich at a time when the team audited the House Finance Office and made reforms that Hasdorff said have resulted in savings of more than $4 billion.

“When polled, 70 percent of young people said they would vote for socialism and one in three support communism,” Taylor said. “It’s something we’ve got to fight back against.”

Taylor is an “attorney by training,” she said, with a bachelor’s in political science and master’s in public administration. In the past 10 years overseeing a multi-state business, Taylor said has worked with many nonprofits and faith-based program and has seen personally which government programs work and which don’t. She served as the president of the board of directors for the River Region Pregnancy Center and said she believes in limited government and supporting military and veterans.

Taylor also called out fellow candidate Jeff Coleman after accusations that his company defrauded the federal government of more than $700 million. The accusation references a2012 claim by the U.S. Department of Justice that Coleman  Worldwide Moving inflated the weight of household furnishings it moved for the US military. The company admitted no wrongdoing in the settlement of the claim.

Coleman responded in his segment of the program that he would not engage in ”negative politics.”

Coleman said he is the fifth-generation leader of the 106-year-old company based in Dothan and is proud to employ more than 300 Alabamians.

“Economic development is a big part of my campaign,” Coleman said. “We employ more than 2,000 people and I have served as the chair of the Dothan Chamber of Commerce as well as the state chamber.”

Barry Moore said he has a four-part litmus test when considering a vote: faith, family, finance and freedom.

“The first question I ask is is it in line with my Christian faith?” Moore said. “Then I ask how it will impact my family, if it makes financial sense and if it protects freedom.”

Moore said he is for term limits, term-limiting himself in the Alabama House of Representatives, where he said he was the “most dependable conservative vote” in his first four years in office. He also shared that he was the first elected official to endorse Donald Trump as candidate for President in the 2016 election campaign.

“I’m happy with Trump and disgusted with Democrats,” Moore said. “Can you imagine what he could have done if they got out of his way and let him leading the way he’s leading?”

Troy King said the clearest example of what’s wrong with government is that “government doesn’t respect life and judges don’t know what their jobs are.”

“I learned growing up to keep your Bible open and guns loaded; to stand for the anthem and kneel for God,” King said.

King said Trump was elected because Republicans were tired of being told what they could say or think and that he would support Trump in office and protect him.

Thomas Brown said he believes a young Republican is needed in Congress to shake things up.

“If elected, I would be the youngest Alabama Republican in Congress in the last 1000 years,” Brown said. “The Democrats would no longer be able to claim they are the party of youth.”

Brown said he would bring transparency to the seat and shared a platform to advocate for an interstate connector to make the region more easily accessible. He also cited supporting the military, expanding high-speed internet in rural areas as top priorities, and reining in “out of control” healthcare costs as priorities.

Bob Rogers said he would support Trump if elected to office and would focus on hearing directly form constituents.

“We need to be back here in District 2, just like during the campaign, learning what the people need and want,” Rogers said.

Rogers has a background in law enforcement and said his top issues include protecting the borders and the Constitution.