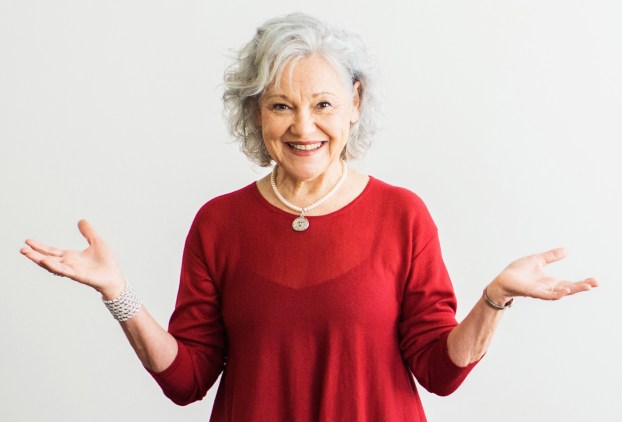 Barbara McBride-Smith is coming early for one — no four, reasons – fatback, biscuits, tomato gravy and greens!

The Texas-born storyteller’s first scheduled appearance at the Pike Piddlers Storytelling Festival was canceled due to an ice storm in Oklahoma. But, that was before she feasted on fatback, biscuits and tomato gravy and greens at Sisters.

Since then, not even an ice storm could ground her from supper at Sisters.

Barbara McBride-Smith grew up in Texas, was educated in Massachusetts, discovered the ways of the world on the Jersey shore, settled for a long time in Oklahoma and is now are resident of Jonesborough, Tennessee, the home of the National Storytelling Festival.

But she’s just as ‘at home’ crowded around a table with fatback as the main dish.

And what a feast of stories she serves up.

Barbara McBride-Smith is the female’s answer to Donald Davis,” said Cathie Steed, a member of the Pike Piddlers Storytelling Festival storytelling committee. “When she steps to the microphone, she takes off and never slows down. She has been compared to a fire and brimstone preacher and even a fire and brimstone preacher would have to take a backseat to her ‘sermon.’”

Audiences that have heard McBride-Smith’s “preaching” want to hear it again.

“You can’t catch it all because you are laughing so hard,” Steed said. “It’s like that with so many of her stories. Then, she can turn right around and tell a story that touches your heart. I love the story about her mother’s button box. It brings back memories for me. To me, a great story is one that the audience can relate to and Barbara McBride-Smith is a master at that.”

The Pike Piddlers Storytelling Festival is paid for in part by a grant from the Alabama State Council on the Arts with support from the National Endowment for the Arts.