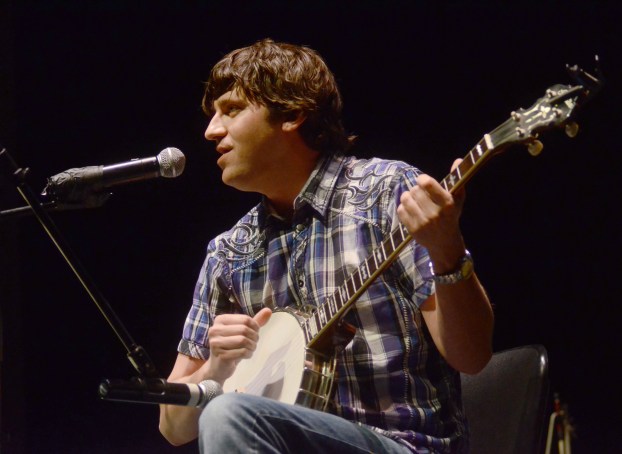 If Josh Goforth doesn’t play anything but “Orange Blossom Special” on the fiddle at the Pike Piddlers Storytelling Festival, then Troy radio personality Ralph Black will have had more than his money’s worth.

“That young man can play a fiddle like nobody else I’ve ever heard,” Black said. “And, he’s just as amazing on the banjo and guitar, but I’ll tell you that boy can fiddle.”

Goforth lights up the stage with his energy and big mountain grin, whether he’s piddling around in Pike County or on stages around the globe.

Goforth, a Grammy nominee, has appeared at Carnegie Hall and on the Grand Ole Opry and he is also making his mark on the national storytelling circuit.

Storytelling came as naturally to Goforth as playing music. Growing up in a tight-knit community in the mountains of Western North Carolina, he was surrounded by storytellers.

“I never really thought about storytelling because it was just something that happened all the time,” he said. “I would listen to my grandmother tell ghost stories and my granddad tell old tales.”

Goforth never thought of stories as anything but stories…until he was introduced to professional storytelling while traveling and performing with David Holt, a Grammy winning musician and storyteller.

The young musician realized his life was filled with interesting characters so be began to weave those stories and characters into his performances. For Goforth, it was almost impossible to separate the stories from the characters. So, what he will bring to the stage of the Pike Piddlers Storytelling Festival is the best of both worlds – music and stories.

And, those who were at the annual storytelling festival the first year Josh Goforth took the stage will not soon forget.

At the close of the concert on Saturday afternoon, Goforth stepped away from the microphone and stood flatfooted and sang a traditional ballad, a cappella. You could have heard a pin drop in the Trojan Center Theater. The audience rose to its feet in appreciation for what many said was “music like they had never heard before.”

Josh Goforth will have his audience laughing at the antics of his grandpa and wiping way a salty tear at a heartfelt story. Folks will clap their hands along with his foot-stompin’ music and sit spell-bound when he steps away from the microphone and sings straight from the heart.

The Pike Piddlers Storytelling Festival is paid for in part by a grant from the Alabama State Council on the Arts with support from the National Endowment for the Arts.

The most that can be said about Bil Lepp is that he is a flat-out liar. The West Virginia storyteller... read more