FROM FIELD TO LOOM: Blankenship continues tradition of spinning thread 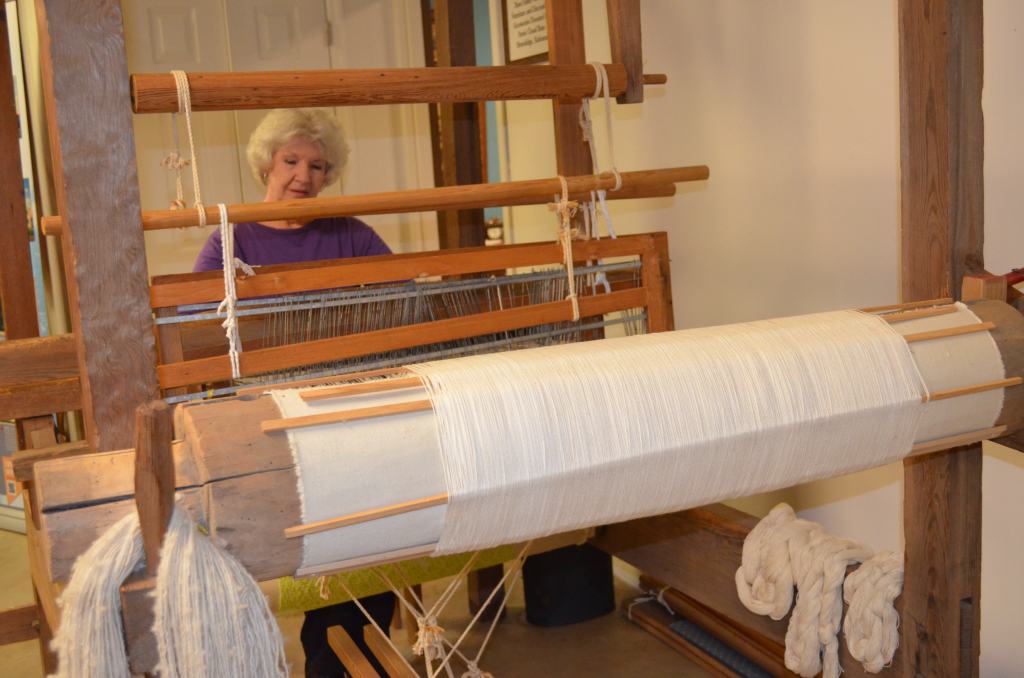 If Shirley Blankenship had been born around the 1820s, she would have been in her element. Blankenship has always appreciated the pioneer way of doing things. So, it was natural that the Pioneer of Museum of Alabama became her home away from home.

A museum volunteer, the late Alice Thornton, quickly became her mentor. Thornton was a master spinner and a weaver and she wanted to pass the art of spinning and weaving along.

“I looked up to Mrs. Thornton,” Blankenship said. “I listened to her and watched her but I was not sure that I would ever be able to spin and weave.”

When the time came for Thornton to take the next museum spinner and weaver under wing, Blankenship was the natural choice.

“I was scared to death,” Blankenship said, laughing. “I wanted to learn and Mrs. Thornton was the best teacher I could have but, I doubted that I could ever learn to go from the field to the loom.”

Blankenship, who, at that time, was a museum employee, was a dedicated learner.

“Charlotte Gibson was the museum director and, on the afternoons Mrs. Thornton was volunteering, she gave me time to spend with her,” Blankenship said.

The loom was her first challenge and, surprisingly, weaving was much easier to learn than spinning.

“The loom at the Pioneer Museum of Alabama is more than 200 years old and, of course, was handmade,” Blankenship said. “It is a four-harness loom and the pattern that I learned was the honeysuckle. It is made up of diamond shapes and I had to remember exactly what to do to make the shapes. I enjoyed weaving and learned fast, but, of course, I had a great teacher.”

Spinning, however, was not as easy. In fact, Blankenship said learning to spin took great concentration and coordination.

“The museum has a Great Wheel; it’s called ‘great’ because is so large,” Blankenship said. “It is a Waulking Wheel because you have to stand to spin it. Then, you have to walk back and forth with the yarn you spin.”

However, Blankenship said the journey from the farm to the loom is a long one but it’s one that she enjoys taking.

Just as the Alabama pioneers journeyed, so does Blankenship.

The journey begins in the cotton field in the mid- to late fall or early winter as it may be.

First, the pioneers picked the cotton and set it aside until the early spring.

“In the fall, I go to a cotton field in Goshen and pick the cotton I will need, just as the pioneers did,” Blankenship said. “Then, the cotton has to be cleaned. You have to remove all the trash and then get out the seeds.”

Blankenship said the pioneers found a way to bring pleasure to that long and tedious task.

“The pioneers would have cotton seeding parties,” she said. “Word would spread from the country store that a family was having a cotton seeding party and the neighbors would know they were invited. Children would come with their parents.”

“The cotton in the shoes would be the cotton each person would seed,” Blankenship said. “So, the children would only have a small amount to seed, while the adults would have larger amounts.”

Blankenship laughingly said woe be it to the one who wore high-top boots.

After the cotton was seeded, it had to be carded. Two brush like paddles would be worked against each other to get the cotton fibers going in the same direction so the cotton could be spun into thread on the spinning wheel.

There is an art to spinning cotton to thread. The turning of the wheel, the tension the spinner places of the thread to keep it uniform and walking it back to the spindle, Blankenship said.

The process of making a homespun shirt or dress was a long and tedious process for pioneers. Today, factories turn out clothing almost in the batting of an eye.

But, Blankenship said clothing and coverings from the farm to the loom were made with loving hands and lasted for generations.

The Pioneer Museum of Alabama takes visitors back to those days when man lived by his hands and his wit. In today’s high-tech world, almost anything is a possibility. But, only museums can take travelers back in time.

Visit the Pioneer Museum of Alabama from 10 a.m. until 5 p.m. Thursday through Saturday.