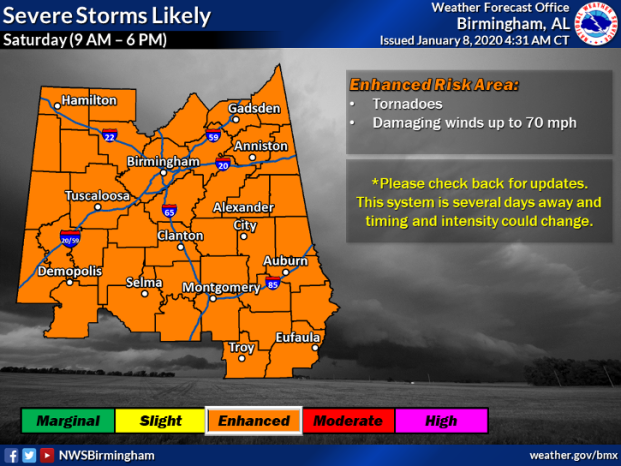 Public responders are preparing for the potential of severe weather in Pike County on Saturday.

Pike County is included in an enhanced risk for severe thunderstorms Saturday that could lead to tornadoes and damaging winds of more than 70 miles per hour. The severe weather is expected in Pike County between 2 p.m. and 8 p.m., but a wind advisory took effect Friday night as sustained winds of 15 to 25 mph sweep through the area with gusts of more than 40 mph possible.

Troy Utilities Manager Brian Chandler said the department is bringing everyone in to handle potential outages from the storm.

“As usual we’re going to be prepared in case we do have a lot of winds and stormy conditions,” Chandler said. “We certainly expect to see rain and some winds. We’re calling all of our crews in, manning the office and phones tomorrow afternoon with utility personnel. We’ll be sitting ready on go so that, as soon as the weather calms down, we can get crews out to restore power. Hopefully we will not have anything major though.”

Fire department officials will also be ready to respond to downed trees and any damage or wrecks caused by the conditions.

“We’re bringing a couple of guys back on board,” said Troy Fire Chief Michael Stephens. “We’ll be fully staffed plus some. We’ll have an extra engine ready and our ambulance will be staffed. You prepare heavy and hope that you don’t need it.”

The Troy Recreation Center will open as a storm shelter at 8 a.m. until the storm threat has passed.

“People who are in Troy and Pike County that are not confident in staying their homes, we encourage them to come stay with us,’” said Dan Smith, director of Troy parks and recreation. “We’ll have limited resources, which means likely little to no snacks or food items. We encourage you to bring anything and everything you might need during the duration of your stay. It will not be open for spending the night, but we will be open as long as we have to until we know that threat has passed; then people can return to their homes.”

The shelter is located at 601 Enzor Road.

Reeves urged residents to remain weather aware as the system moves through to keep up with tornado warnings and other severe weather threats and cautioned drivers to be careful if they must take the roadways during the wind and rain.

Some flooding is also a risk, especially in low-lying areas, Reeves said.

On Dec. 20, 2019, the legal age to Tobacco suddenly jumped from 19 to 21 nationwide when president Donald Trump... read more