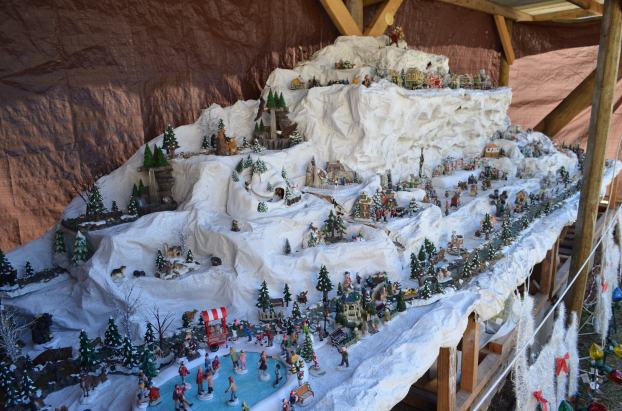 Somewhere on a dirt road near Beasley’s Grocery in Sardis there is a Christmas mountain village that was created in the mind of Cindy Brown more than 16 years ago but became reality only two years ago.

Brown welcomes visitors to the 16-foot outdoor diorama along with several excited dogs and pups. The is air crisp and the wind is brisk.

She smiles quickly and with pride in her outdoor creation that is protected from the elements by three wooden walls and a roof. She urges the dogs away and invites visitors to view the village.

‘I’ve been collecting the Department 56 figures and village pieces for about 16 years with the idea of doing this,” Brown said. “They are small, two to three inches, but I like that because space is limited. Some pieces I’ve bought at stores, some at yard sales, just anywhere I could find anything that would add to the Christmas mountain village.”

The basis for the 16x4x3-foot diorama is cardboard boxes and the mountain for Brown’s village is paper mache made from blank newsprint paper.

“The entire mountain is made from newsprint,” Brown said. “But, because it’s outside, it had to be protected, so I coated it with Flex-Seal so it’s weather proof and it’s sturdy. My mountain is snow-covered so I painted it white.”
Brown’s idea was to create an entire mountain village with a river running through it.
“On the far side of the mountain, it’s all wilderness, with lots of trees, four waterfalls and every animal that you would find in the mountains – mountain goats, bears, deer, elk, wolves, squirrels, foxes and over here is a beaver dam with beavers and there are muskrats. Up here in the tree is a hawk.”

Brown continued naming animals that live on her mountain and then moved down the mountain to the outdoor ice skating rink where skaters glide across the ice as the music plays.

Brown then gave a tour of the mountainside that is teeming with people and places.

“The villages have everything that anyone would need – places to live and to shop, restaurants, hotels, lodges, cabins, churches and one village even has a doctor’s office, a carpenter’s shop and a train station with a passenger train.

The entire mountain is dotted with villages and are cabins tucked away in the mountainside.

At mountain a river, runs the length of the diorama and is populated men fishing through openings in the ice and others setting up camp and some casting off in canoes.

All up and down the river there are areas of interest as diverse as a playground for kids and a dismal swamp area.

And, Brown has plans for more additions to the mountain including a suspended railroad track.

But all in time.

“There’s no way to say how much time this has taken,” she said. “And, it’s been discouraging at times. When I started building it two and a half years ago as a paper mache mountain, it was in the corner of my living room. It soon got so big that I put it out on the porch. I had taped boxes together and stacked them to make the mountains but with all the moisture, the mountain collapsed.”

Brown realized then that the mountain had to be protected so she moved to a protected place outside, bought 12 cans of Flex Seal and a tarp to cover the front and made it secure.

But, for her, it has been a mountain top experience and she wouldn’t take the world for it.

The Pike Liberal Arts Patriots have had an up and down season heading into the holiday break, but on Thursday... read more