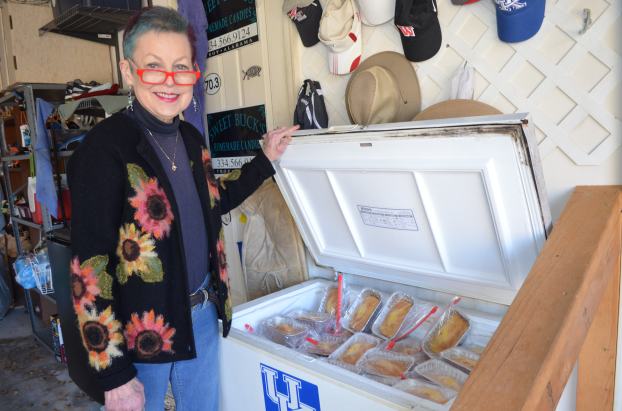 Ask Rebekah Woods the significance of the number of pound cakes she bakes each year for Pike County Turkeys from Heaven and you might be surprised at her answer.

Woods said there is nothing about 102 that has special meaning for the Christmas season or the number of feathers on a turkey’s wings.

Her answer comes with a broad smile.

Woods said she prefers the mini-loaf pans because the cakes don’t have to be cut and divided.

She puts each of mini pound cake in a zip-lock bag and that’s enough for one or two people.

Woods has been baking pound cakes for Turkeys from Heaven since the first year, now six years ago.

Woods said there are several ways that the community can participate in Turkeys from Heaven, from donating a turkey, to furnishing a dessert, putting together a casserole, packing meal baskets, grilling turkeys and delivering meals.

Turkeys from Heaven is a communitywide evert and there is a place for everyone, from the youngest to the oldest.

“For me, it’s baking cakes,” she said. “My interest in baking began as a child. Even before I started pre-school, my mother would put a chair up to the kitchen counter and let me play in pie dough. I enjoyed it so much that when I got older she gave me a Betty Crocker Cookbook for Boys and Girls. We made things out of the book using a real mixer and oven. My mother and I cooked big meals doing that.”

Woods said her mother gave her free reign in the kitchen.

“I would mention something that I would like to try and she would say, ‘Go right ahead,’ and I would,” Woods said laughing.

Childhood experiences play a role in a hobby that Woods has continued and one that has had a positive impact on her life. And, there is more than a good possibility that children who participate in outreach activities, including Turkeys from Heaven, will carry that giving spirit forward into adulthood.”

On Sunday, “Pike County Turkeys from Heaven” will deliver 500 meals to less fortunate individuals and families throughout Pike County and into Crenshaw and Bullock counties. The deliveries will begin at 1 p.m. at Cattleman Park. Volunteers are needed and appreciated throughout the afternoon.

Donations of non-refrigerated desserts may be delivered to Cattleman Park on Saturday.

President Donald Trump became just the third President in U.S. history to be impeached Wednesday after the House of Representatives... read more