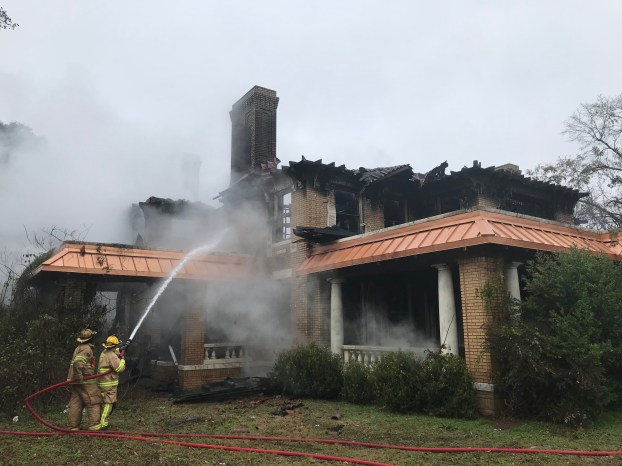 A fire at the former house of Pi Kappa Phi was not caused by lightning according to Troy Fire Department officials.

“Once the fire was extinguished, the Troy Fire Marshal’s office, along with assistance from the Alabama State Fire Marshals office, set out to investigate the cause of the early morning fire,” said Fire Chief Michael Stephens. “Involvement from a line of severe weather that had moved through the area at the time the fire occurred was investigated and ruled out as a cause. Weather information noted at the time of the fire placed lightning out of the area during the estimated ignition time.”

Investigators also ruled out an electrical cause since the house was abandoned and had not had electrical service for many years.

The house has been abandoned for about 20 years since the fraternity moved in the late 90s.

“That house meant quite a lot to us,” said Probate Judge Michael Bunn, a Pi Kapp alumnus. “It was a grand old house, somewhere in the neighborhood of 7,500 square feet … It broke my heart to see it burned.”

Firefighters were dispatched to the home at 4:42 a.m. on Friday, Dec. 13 and it took approximately 30 firefighters nearly two hours to bring the fire under control.

The investigation continues as firefighters work through four stories of debris burned in the house.

However, firefighters have been able to check the house to ensure nobody was trapped inside and did not find anybody. Firefighters had to wait for more than a day to double check for people as the house smoldered.

The cause of the fire remains unknown at this time.

Anyone having information that may assist in the investigation may contact the Troy Police Department Secret Witness Line at 334-566-5555, or The Alabama Arson Hotline at 1-800-654-0775.

Workers riding on the backs of garbage trucks will soon be a thing of the past in the City of... read more