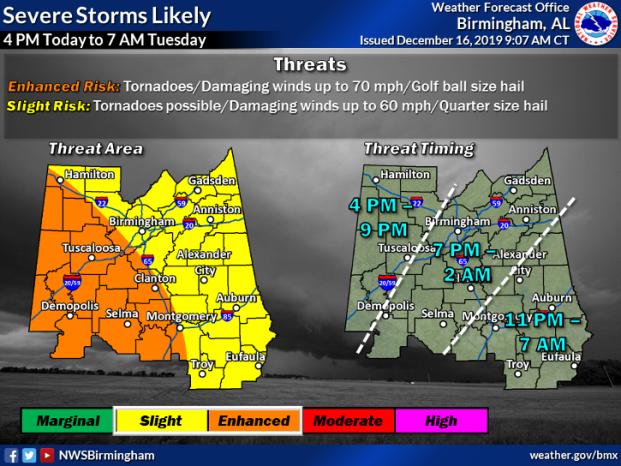 Troy is at a slight risk of severe weather overnight that could produce isolated tornadoes, strong winds and hail.

Pike County EMA Director Herb Reeves said the majority of the threat is expected west of Pike County, but that residents still need to remain alert and aware as severe thunderstorms can be unpredictable.

“For us, it’s going to be an overnight event sometime after midnight into the early morning hours,” Reeves said. “People need to have some means of being notified should the weather turn bad.”

According to the National Weather Service in Birmingham, Pike County is just outside of the enhanced risk area and Reeves said he will be continuing to get updates from NWS officials as the day progresses to monitor the expected impact of the storms.

Several mobile homes were impacted in Hamilton Crossroads just before Thanksgiving by strong straightline winds, including one home that had windows blown out by the storm.

With multiple structure fires in the past few weeks, Troy Fire officials are reminding residents about safety tips and the... read more