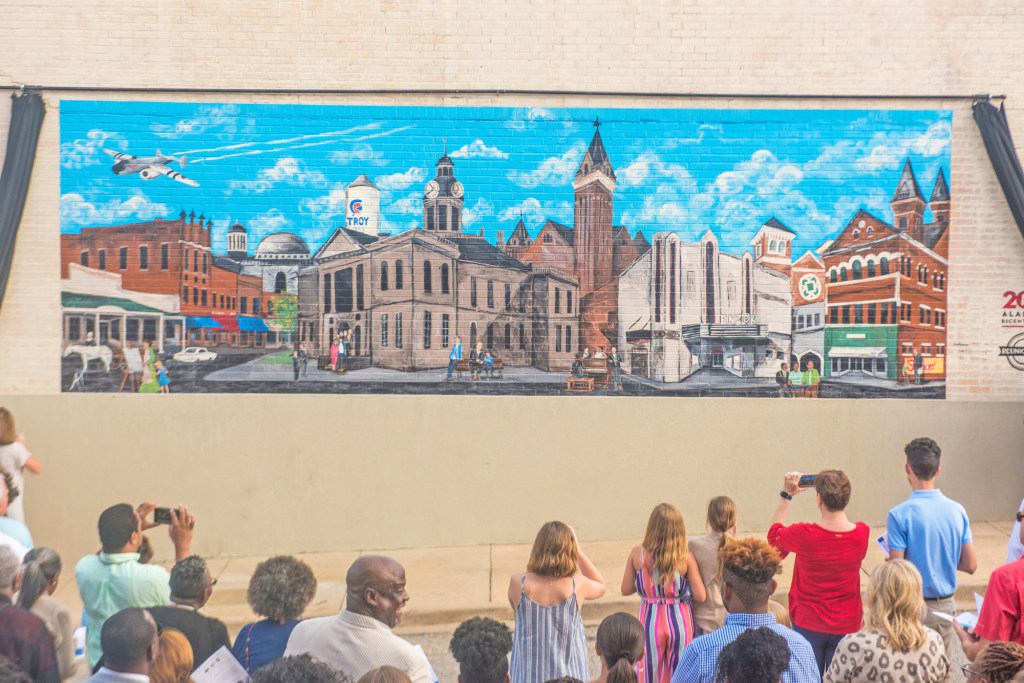 Just in time for Christmas, prints of Troy’s Alabama Bicentennial mural are available for sale.

Stephanie Baker, Reunion Troy committee chair, said the mural print was the result of the great amount of interest expressed by community members in having a print of the city’s Alabama Bicentennial mural.

“So many had said they would like to have a print of the mural for their homes, offices and businesses or to send to family members or friends so the committee made the decision to have prints made,” Baker said. “But, the committee also decided to have smaller prints made of the individuals and groups of people featured on the mural.”

The mural was designed by Alex McLendon, a Troy native and a 2019 Troy University graduate with a major in art. Art students from Charles Henderson and Pike Liberal Art high schools, seniors from the Colley Complex and other volunteers assisted McLendon with the painting of the mural.

The Reunion Troy committee realized a published guide was needed to identify the buildings and people of interest included on the mural so the mural project was extended to include the guide.

“The committee understood how important the mural and the guide would be for future generations in accessing our city’s history,” Baker said. “Committee member Nicklaus Chrysson had done such a great job of researching information for the mural that the committee asked him to compile the information and photographs he had available and make them available in a softback booklet publication that would be a compilation of his research.

Chrysson said, too, the information was worthy of being preserved in print and agreed to undertake the project.

about Troy, “City of Troy: Our People, Our Places, Our Stories.”

The Alabama Historical Commission planned a three-year celebration of Alabama’s Bicentennial, and dedicated 2017 to Alabama’s people, 2018 to its places and 2019 to its stories.

And, those three areas of interest are the focus of Troy Reunion’s booklet which Chrysson said encapsulates the history of the mural.

“In doing the research for the mural, I learned a lot about the City of Troy and the people who helped make it the great city that it is,’ Chrysson said. “Much of the research came from Bill Rice, Sr.’s “Troy 1828-2006” and Margaret Pace Farmer’s “History of Pike County and also personal interviews.”

The booklet includes photos of many of the individuals featured and a brief history of each. Also included are photographs of local landmarks.

The mural project items are now on sale with all proceeds dedicated to the maintenance of the Troy Bicentennial Mural and other murals around the city and to future mural projects.

Prints of the full mural without the individual groups are $30 each.

The Christmas package deals are $75 for all prints (booklet not included) and four prints for $30. Full mural and one smaller people print are $35.

The mural prints and booklets are available at Troy City Hall. Cash and checks are accepted. Checks should be made out to City of Troy-Reunion Troy.

HUSTLE AND BUSTLE: Steed looks back on thriving grocery…